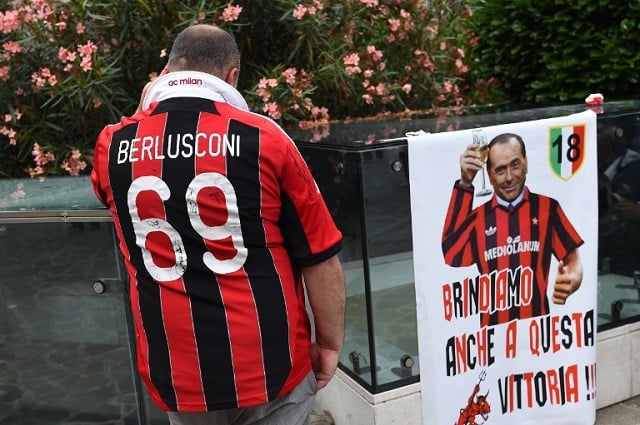 On Thursday, there was less pomp but plenty of room for nostalgia as the 80-year-old former cruiseship crooner, media tycoon and ex-Prime Minister of Italy ended his 31-year reign of the seven-time European champions by selling the club to a Chinese-led consortium.

Yet matching the success Milan enjoyed under the controversial former club owner will be a formidable challenge, given Milan's recent struggles and the simultaneous rise of southern clubs Roma and Napoli.

Although his political career was dogged by gaffes, controversy and sexual intrigue, Berlusconi's AC Milan were a resounding success.

Already a successful media entrepreneur by the time he bought the ailing club in 1986, Berlusconi's fancy arrival by helicopter in 1986 was simply a sign of what was to come.

A relative unknown who had never played top level football and never coached in Serie A, Sacchi's high-pressing 4-4-2, equipped with a finely-tuned offside trap that snared Real Madrid no less than 23 times during a European Cup semi-final in 1989, went on to dominate Europe with skill and finesse.

Now 71 and a popular pundit, he recently recalled how Berlusconi introduced him to the team.

“He came and spoke to the team for 30 seconds, and it was the most efficient speech I've ever heard,” Sacchi said.

“He said, 'Sacchi is the coach I've chosen. The players who are with him can stay at Milan, the others can leave'.”

Milan won their first scudetto in nine years, in 1988, secured their first European Cup in two decades the following season and defended it in 1990.

Sacchi's departure in 1991 paved the way for Fabio Capello, a former Milan player, to steer the Rossoneri to three consecutive league titles in 1992-1994.

His spell included a 58-match unbeaten run in Serie A and incredible successive appearances in the Champions League (formerly European Cup) final in 1993, 1994, and 1995.

After losing to Marseille in 1993, Milan stunned Johan Cruff's feted Barcelona side 4-0 a year later only to fall to a winner from 18-year-old Ajax player Patrick Kluivert in the final a year later.

It took until 2003, and the arrival of former Milan star Carlo Ancelotti for Milan to reach the summit in Europe again, beating Juventus on penalties to secure a sixth European title.

Despite reclaiming the Serie A crown in 2004, Milan famously lost the 2005 Champions League final to Liverpool after leading 3-0 at half-time – making amends two years later with a 2-1 win over the Reds in the 2007 final.

Ancelotti, who also led Milan to their first World Club Cup, later revealed: “Berlusconi criticised us when things were going well, and gave us support when they were going bad. Most presidents do exactly the opposite.”

Despite winning their last league title, in 2011, under current Juventus coach Massimiliano Allegri, the loss of several key players in the summer of 2012 was a turning point from which Milan never recovered.

In December 2012, Berlusconi was ordered to pay his ex-wife Veronica Lario $48 million (45 million euros) a year as part of a divorce settlement.

A succession of dubious coaching appointments saw Clarence Seedorf, Filippo Inzaghi and Sinisa Mihajlovic respectively fail to steer the club back into Europe.

When Milan announced last August the club would be put up for sale, Ancelotti said he believed Berlusconi had “taken the club as far as they can go”.