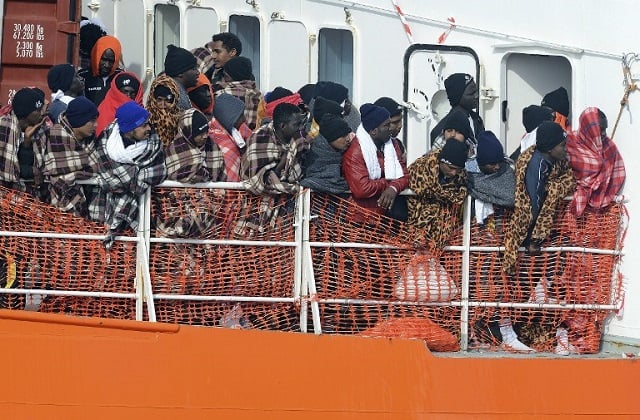 Calm seas and mild weather led to the surge in those making the risky journey, with over 2,000 brought to safety on Friday, 4,500 on Saturday, and and a further 2,000 on Easter Sunday.

Doctors Without Borders shared video footage of a group of migrants singing and praying during their journey, as well as a photo of volunteers “singing to welcome everyone” at the Sicilian port.

It's beautiful to see so many friendly faces waiting to meet our guests in port. These volunteers are singing to welcome everyone to #Italy. pic.twitter.com/BfIBydqUkq

The bodies of 13 migrants, including a pregnant woman and a small boy, were also recovered during the rescue operations off Libya, a Maltese NGO and the Italian coastguard said.

“Imagine carrying an eight-year-old boy's lifeless body into your house on Easter Sunday. I will never forget this day,” tweeted Chris Catrambone, founder of Maltese NGO Moas, on Sunday.

As weather conditions deteriorated, NGOs urged more vessels to head to the region, with their own already crammed with around 4,500 people picked up from unseaworthy vessels the previous day in 35 operations.

Friday saw some 2,000 people rescued while the body of one young man was found, presumed asphyxiated, aboard one vessel bursting with people.

With arrivals showing no sign of abating, EU's border control agency Frontex has accused donor-funded vessels of doing more harm than good by acting “like taxis” off Libya.

Italian prosecutors have suggested they may have links with traffickers – a charge fiercely rejected.

The International Organization of Migration says 666 people have been logged as dead or missing off the Libyan coast so far this year out of an estimated 27,000 who have tried to reach Italy from Libya.