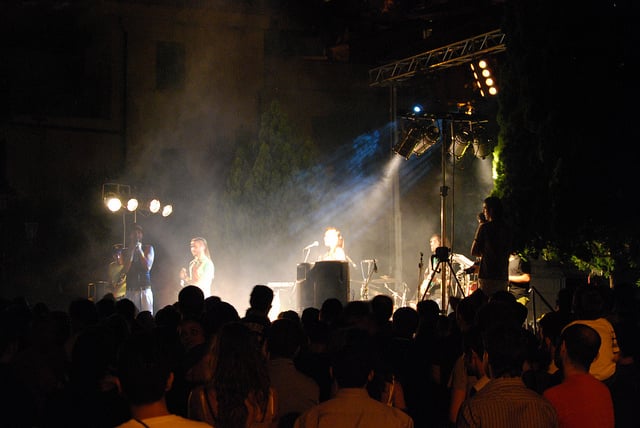 The historic dialect of Southern Italy, spoken by the Griko people, is on the verge of extinction.

However, it's still alive – largely thanks to the music associated with it.

Also known as Salentino-Calabrian Greek, Griko or Italiot Greek is an umbrella-term for two distinctive dialects: Griko, spoken in Salento, and Calabrian Greek, still present in Southern Calabria. Both dialects are usually referred to simply as 'Griko'.

Partially intelligible with Modern Greek, its exact origins are unclear even to academics with expertise in the area.

Historians and linguists have put forward several hypotheses, linking the dialects with Ancient Greece and Magna Grecia or with the Byzantine Empire, but none of these theories has been proven.

But wherever its Greek-ness came from, Griko has also been heavily influenced by the Italian Language, and speakers use both the Greek and Latin alphabets.

For instance, the Griko word for family ('famija') sounds nothing like the Modern Greek word 'oikogeneia/οικογένεια' but bears a resemblance to the Italian 'famiglia'.

The number of Griko speakers, largely confined to Salento's ethnic Greek community, has been continuously declining. Its use is limited to the Lecce Province in southern Apulia and a few small villages near Reggio di Calabria – in the toe and heel of Italy's boot – most of which have a Griko name as well as an Italian one.

In 1999, the Griko communities of Calabria and Salento were recognized by the Italian parliament as a Greek ethnic and linguistic minority that is protected by the Republic.

Serious efforts have been made in recent years by several local associations (such as Enosi Griko and the Griko Milume Association to raise awareness and preserve its existence, for example sharing vocabulary lists and grammar lessons online and organizing Griko courses in collaboration with schools.

But with so few speakers and limited subsidies from the government, the future of the dialects seems inescapably bleak.

The main hope for its future can be found in its music.

Unlike Griko itself, Griko folk music continues to be remarkably popular in Greece, whereas in Italy it has received limited attention and, apart from Salento and parts of Calabria, most Italians are not even aware of its existence.

Roberto Licci founded the musical group Ghetonia, one of Salento's best-known folk music groups, in 1992. He told The Local: “Griko is still surviving and there is greater awareness, but people do not use it in their daily lives. The economic situation of local authorities in Salento is not that good, so there are not enough funds to support those activities.”

“Even in Bari or Northern Lecce , people are not necessarily familiar with Griko or Griko music” says Licci.

However, plenty of artists are enthusiastic about promoting Griko music and the culture it represents, and once you know where to look, it's not hard to find one of the festivals celebrating Griko folk traditions.

La Notte della Taranta is one of the most popular folk music festivals in the region, held each summer. Since 1998, it has featured a lineup of different local artists, including Ghetonia and other Griko bands.

Another well-known festival is PaleaRiza Festival, held in Bova Marina, Calabria. Found in 1997, the festival aims at uniting the the local Griko culture with the rest of the Mediterranean and promoting Griko music in general.

So Griko,a dialect that has fallen victim to the Italianization, owes its survival to its rich musical culture.

Could music rescue the dialect from extinction? It remains to be seen, but let’s hope that the 'goodnight' message of Kalinifta, which is one of the most beautiful songs ever written in Griko, is not an omen of the dialect’s future.

Born and raised in Greece, Constantinos Orphanos is currently living and studying French & Italian Law in Paris, France. He started learning Italian in primary school and has been a huge admirer of Italian culture and politics ever since.