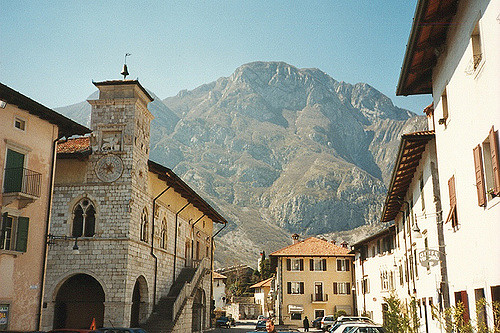 Home to around 2,000 people, the hamlet is known for its lavender, historic mummies, and annual pumpkin festival.

Visitors who venture to the little-explored region of Friuli-Venezia Giulia will be rewarded by delicious local food, striking Venetian-Gothic palazzi, and winding streets that are just asking to be walked down – and Instagrammed.

For those looking for a more unusual twist to their holiday, the chapel's crypt houses some of the 42 mummies which have been found in the village. It's not clear who these people once were, or even how they came to be perfectly preserved, but the curiosity has attracted visitors including Napoleon.

Take a virtual tour of the town with the video below, created by the Borghi Belli (Beautiful Villages) organization which crowned Venzone 2017's top village.

Its remarkably preserved medieval walls and other ancient treasures saw it declared a National Monument in the 1960's.

But then the earthquake hit.

Venzone lies nestled in a valley between the Julian Alps and the Southern Carnic Alps – or to put it another way, directly above one of Italy's numerous fault lines. Venzone lies in the north-east of Italy, close to the Slovenian border.

The president of the Friuli-Venezia Giulia region, Debora Serracchiani said on Monday that she was “personally very happy” about Venzone's victory, noting that it came shortly after the anniversary of the quake, which was marked with ceremonies at the city's cathedral.

Venzone's Duomo has become the symbol not just of the earthquake, but of the town's remarkable rebirth, and the Borghi Belli judges said one of the reasons they recognized it in this year's awards was that it represented “one of the most extraordinary examples of architectural and artistic post-earthquake recovery”.

The only one of the village's gates left standing after the tragedy.

The town was hit by a major earthquake on March 6th, 1976, almost entirely destroying the historic centre and killing 47 people.

The bell tower of its imposing Gothic cathedral collapsed the following year.

However, each of its almost 10,000 stones were preserved, stored and carefully catalogued. Over a period of seven years, the was entirely rebuilt, literally stone by stone, with every one restored to its original place.

A permanent exhibition in Venzone tells the story of the earthquake and the recovery, with a simulation of the cathedral's collapse.

The breathtaking Alpine scenery of Venzone.

Venzone's story has a special resonance in 2017, after a series of earthquakes from last August to January this year have left villages and towns across Central Italy mourning the loss of their homes and local heritage.

In Amatrice, the town worst hit by last August's disaster and home to the majority of the quake's victims, an iconic bell tower survived the first tremors but eventually collapsed this year in an eerie echo of the events in Venzone.

Venzone fought off competition from 19 other shortlisted villages to be named Italy's most beautiful.

It was selected as the winner by online voters as well as a panel of expert judges, made up of a top chef, a geologist, and an art historian.

The victory comes after three years of Sicily hogging the crown: previous most beautiful villages were Gangi in Palermo in 2014, followed by Montalbano Elicona in Messina and Sambuca di Sicilia last year.