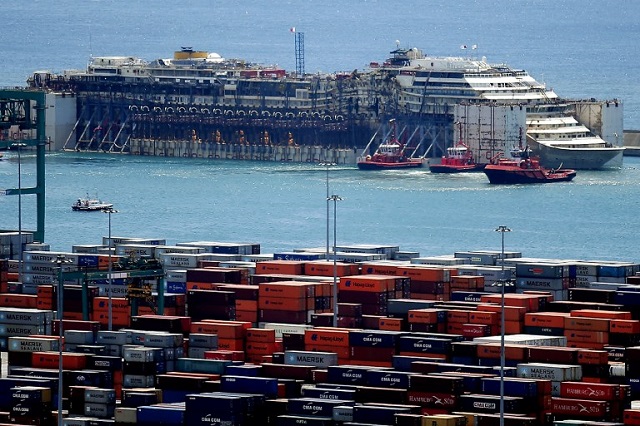 The refloated wreck of the Costa Concordia is towed towards port. Photo: Marco Bertorello/AFP

Schettino, dubbed “Captain Coward” by the press for abandoning the stricken vessel during the nighttime disaster, was handed a 16-year and one month jail term in 2015 in a ruling that was upheld last year by an appeals court.

The Court of Cassation in Rome could uphold the verdict or order the case to be reviewed by a fresh appeals court.

It is not expected to rule before early May, lawyers told AFP.

Schettino, 56, was convicted of multiple manslaughter, causing a maritime accident and abandoning ship before all passengers and crew had been evacuated. He was not in court on Thursday.

Prosecutors have argued his recklessness was to blame for the fate of the giant ship, which struck underwater rocks off the Tuscan island of Giglio on the night of January 14, 2012, and toppled over.

The ship had been carrying 4,229 people, including 3,200 tourists. Schettino's lawyers had insisted the accident and its deadly consequences were primarily due to organisational failings for which the ship's owner, Costa Crociere, its Indonesian helmsman and the Italian coastguard should have shared the blame.

Schettino could not be blamed for the mechanical failures, they said. Costa Crociere avoided potential criminal charges by accepting partial responsibility and agreeing to pay a one million euro ($1.2 million) fine.