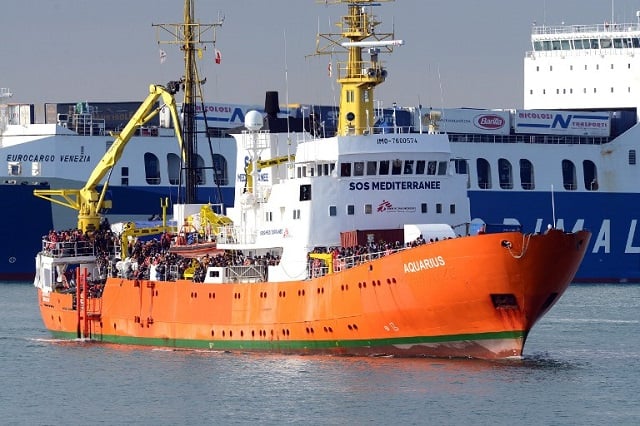 File photo of a humanitarian ship in the Mediterranean: AFP

“This latest tragedy pushes the number of people dead or missing in the central Mediterranean to 1,073 so far this year,” the UNHCR told AFP.

Among the 8,000 or so migrants plucked from flimsy dinghies over Easter weekend were survivors who told the agency about 100 of their fellow passengers had been claimed by the waves.

At this point last year, 853 people had lost their lives or were feared drowned.

Italian tugboat Asso 29 disembarked 1,170 of those rescued in Vibo Valentia in Calabria on Tuesday, including families from Syria, Tunisia, Bangladesh and Sub-Saharan Africa.

“Some of those who arrived in Vibo Valentia told us there were around 100 people who died during the crossing,” UNHCR's Federico Fossi told AFP, stressing that as always in these situations it was “difficult to get precise details on what had happened”.

More than 36,700 people have been pulled to safety and brought to Italy so far this year according to the International Organization for Migration, an increase of nearly 45 percent compared with the same period last year.

At least 150 of those lost were children, though the figure is likely to be higher as many underage migrants travel unaccompanied so their deaths often go unreported, UNICEF said on Friday.

“It is deeply concerning that vulnerable people, including thousands of children, are risking their lives to reach Europe's shores using this incredibly dangerous route,” said Afshan Khan, UNICEF special coordinator for Europe's refugee and migrant crisis.

Several days of calm weather off the coast of Libya saw traffickers set dozens of dinghies or boats out to sea together.

Italy has hopes of shutting down the route, though a deal signed with Libya in February – fiercely criticized by rescue groups and human rights campaigners – is in doubt after it was suspended in March by Tripoli's Court of Appeal.

Interior Minister Marco Minniti said on Friday that Rome would supply Libya with ten coastguard boats by the end of June in its bid to make the Libyan coastguard “the most powerful unit in northern Africa”.

But critics have scoffed at the idea of making any deal with Libya and questioned the legality of returning those picked up at sea to a country where migrants are kept in detention centres and report cases of torture, rape and slavery.