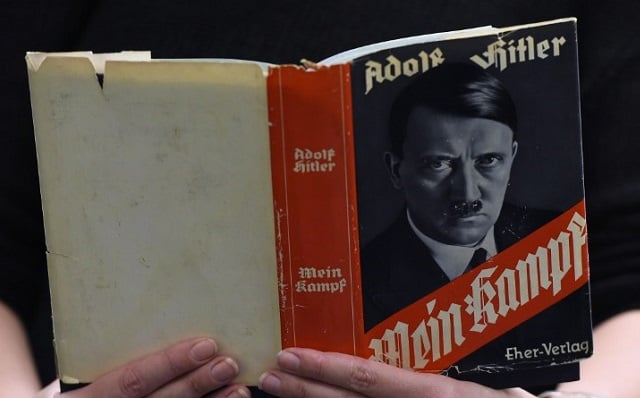 The controversial book is back in print in Italy. Photo: Tobias Schwarz/AFP

The book – the first critical edition aimed at a general audience – has an “ethical and didactic value, which can certainly be of use in the current time”, said Vincenzo Pinto of the organization Free Ebrei (Free Jews), which is overseeing the publication.

He added that it was the first time the text had been published “with adequate critical notes”.

New copies of Mein Kampf hit German bookstores in 2016 for the first time since the war, after its 70-year copyright expired, though Jewish groups at the time questioned the need for the text – which was already accessible to academics – to be reprinted. However, the book topped bestseller lists in Germany.

But Pinto, a scholar with expertise in Zionism and Jewish culture, said that while the German version was primarily aimed at academics, the Italian version targeted a more general audience, and children “above all”.

He said Hitler's way of thinking “relates to the present and future as well as the past” and that studying the years which led to Hitler's rise to power was crucial for Italian schoolchildren. “It has an ethical and didactic useful that can certainly be of use in the current time,” the academic explained.

The Italian version contains a glossary of historical terms and names, an introduction explaining the context, analyses of the rhetoric used, and the socio-cultural context. Pinto also analyzes the lesser-studied years which preceded Hitler's rise to power in 1933, and argues that the themes he discusses in the book “transcend time periods” and are as relevant today as they were in the 1930's.

The Italian daily Repubblica went so far as to hail the new Mein Kampf as an 'anti-fake news edition'.

The explanatory text is not “Italy-centric” and Pinto's hope is that it will be translated into other languages and used in schools worldwide. “The book helps readers gain a deeper understanding of Hitler's logic, which was in fact quite modern, and how he created his political message,” he explained.

The communications manager of ANED, an Italian group representing people deported to Nazi concentration camps, said the new publication may upset those who lived through the Nazi regime, and emphasized the importance of including critical commentary.

“Feelings of nostalgia for this book will always exist and the interpretation of the pages should not be left in the wrong hands,” Massimo Castoldi from ANED told The Local. “But the book continues to exist, and attracts curiosity, even from the younger generation.”

In fact, an Italian survey by the Ministry of Education last year saw Mein Kampf voted as a favourite book by several classes of schoolchildren across the country.

And in June the same year, a rightwing Italian newspaper, owned by ex-PM Silvio Berlusconi's brother, was widely condemned for giving away free copies of Hitler's book.