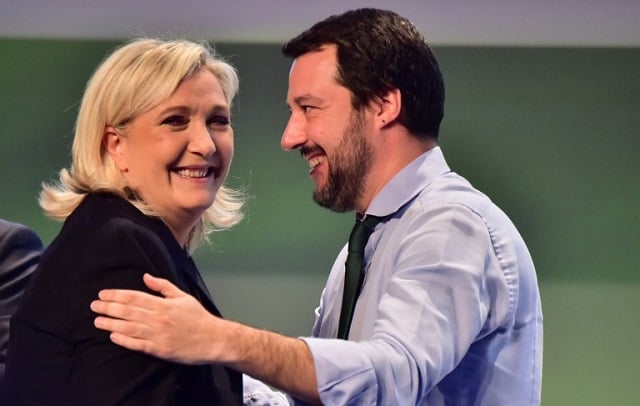 “Go Marine!” said Northern League leader Matteo Salvini, sharing messages in support of the National Front candidate and photos of the two together across his social media profiles.

Salvini acknowledged that it would be “difficult” for Le Pen to win the second round of voting, but added that it was “not impossible”.

Le Pen received 21.43 percent of votes in Sunday's first round, with centrist Emmanuel Macron taking 23.86 percent – meaning that for the first time in decades, neither of France's main parties will be represented in the second round on May 7th.

“The wind of change cannot be stopped,” said Salvini. Speaking before the vote on Sunday, he had labelled Italian journalists “sordid” for “caring more about votes for Marine Le Pen than about deaths caused by terrorism”.

READ ALSO: The full breakdown of how France voted in the first round

Giorgia Meloni, the party's president, said a Le Pen presidency would be a chance for France to “begin the recovery of European populations against technocrats, lobbyists, and ursurers”.

Italy's centre-left politicians however voiced their support for Le Pen's opponent in the second round, pro-EU candidate Emmanuel Macron.

Former prime minister Matteo Renzi said in a Facebook Live video on Sunday that if he were French, he would vote for Macron.

Federica Mogherini, the Italian Vice President of the EU Commission, commented on Emmanuel Macron's decision to make his victory speech in front of both the French and EU flags.

“Seeing the flags of France and the EU greet Emmanuel Macron's victory, it's the hope and future of our generation,” she Tweeted.