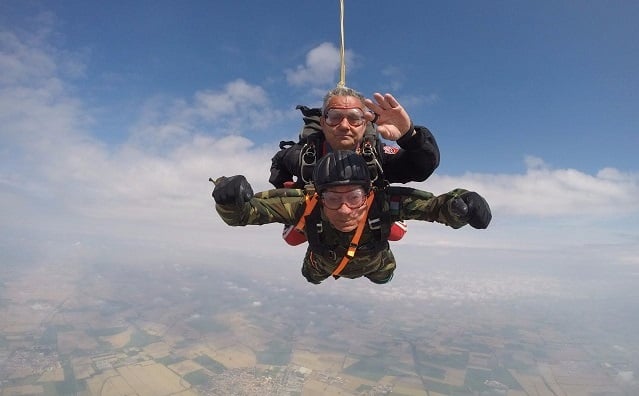 Giuseppe de Grada, from Cremona, near Milan, chose to jump from the plane on Tuesday, Italy's Liberation Day, after turning 96 on April 15th.

Giuseppe de Grada told local reporters he had initially planned to save the experience for his 100th birthday, but decided there was no time like the present.

“It's not that I'm unwell, but after the hip replacement I had some years ago, you know how it is…” he told local paper La Provincia di Cremona.

The jump took place at 4,000 metres in an airfield in Cremona.

“It was such a fun moment! As soon as he touched the ground, De Grada said he would have done it again immediately,” Luca Fontanella, the professional parachutist who jumped with the 96-year-old, told The Local on Wednesday. Fontanella said he believed De Grada may be the oldest person to have ever taken the leap, but said there were no age limits as long as would-be parachutists could prove they were fit and healthy.

“Once we checked that the temperature was high enough, he was good to go,” explained Fontanella.

The company which organized the jump, Aero Club Migliaro, gave the veteran a special harness to support his legs from the impact of landing.

De Grada had fought at El Alamein in Egypt during the Second World War, as part of Italy's paratroopers brigade, known as Folgore, whose name literally means 'lightning' and which specialized in parachute operations.

The video below shows De Grada in action.

READ ALSO: Cheese, wine, and family: The Italian way to live beyond 100 CONFRONTING CORONAVIRUS
Some Swedish care homes have had no cases of Covid-19 – what did they do right?
Url copied to clipboard!