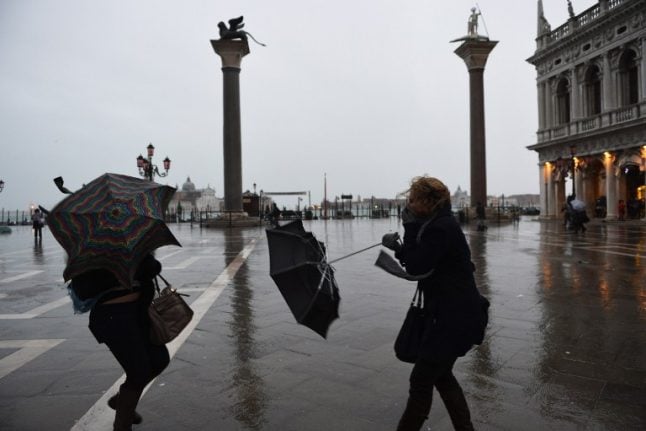 Heavy rainfall, snow, and plummeting temperatures are all on the cards – with some areas predicted to see a month's worth of rainfall in a 48-hour period.

Already on Wednesday, heavy rain and thunderstorms battered the northwest, with Lombardy and parts of Tuscany the hardest hit.

In Venice, an orange weather warning has been put in place from 11:30pm on Wednesday, as the canal-lined city gears up for heavy rain. The local Civil Protection Agency sent out an SMS alert to local residents warning that up to 105cm of rain was expected.

“The area most affected will be St. Mark's Square, where water could rise to about 25cm above ground level,” said the city hall in a statement.

The central and southern regions enjoyed sunny weather and mild temperatures on Wednesday, but weather conditions across the country are set to worsen as the week goes on.

On Thursday, several areas of the north are expected to see high levels of rain, particularly in the Po Valley, the Friuli-Venezia Giulia region, the central and eastern Alpine regions, and parts of Liguria and Tuscany.

Umbria, Lazio, and Sardinia will also be affected by rain and thunderstorms, with clouds and local rain showers in Le Marche, while the south and Adriatic regions will remain sunny.

Friday will see the rain clouds travel over to Abruzzo, Molise and southern Campania, while weather in the north will continue to be unstable. Temperatures are expected to stay around the seasonal average in the south, but are likely to drop well below in the north, particularly in the areas worst hit by rain.

Meanwhile, meteorologists have said the Alps will see snow at increasingly low altitudes, at around 2,000 metres on Thursday and reaching as low as 1,000 metres on Friday.