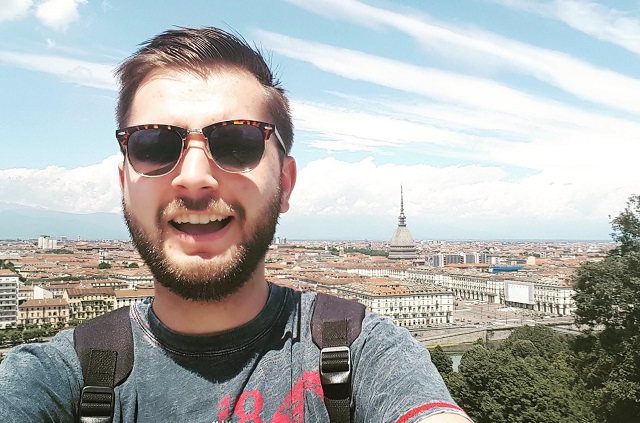 Daniel at a viewpoint in Turin. Photo: Daniel Williams

The Italian language has had more of an impact on me than anything else in my life so far.

Though at first people seemed sceptical of its usefulness to me, a boy from Wales, my love for Italian was instant. I was one of only a very few students at my school who studied the language, but I have not looked back since.

However, it wasn't until I spent a glorious year in Turin, back in 2014, that I felt I was truly able to appreciate Italian culture and the way of life there. I won't lie: I knew nothing about the city before I went except that the famous film The Italian Job was filmed there.

The best thing about the experience was that the city unfolded in front of me; I fell in love with the city, everyday I discovered something new, and by the time the year was up I felt truly Torinese!

One of the first and perhaps most surprising lessons was that the best kebabs I have ever had were consumed in Turin. There's nothing more terrifying than being in a foreign country by yourself at the age of 19, and during my first days in the city I went to several of the many kebaberie in the city, soon becoming a connoisseur.

In between consuming meat from questionable sources, I made it my duty to see every corner of the city and in doing so I uncovered an array of beautiful places. My friends joked that all I ever did was walk around the city by myself and there's some truth in that, but it was the best way to squeeze every drop of Italy out of my time there.

I wanted to fulfil my dream of walking into a café and instantly being greeted by the barista with a friendly ‘Dani! Come stai? Il solito?’ (Dani! How are you? The usual?) Those five words would prove I'd made it and achieved the coveted status of a local.

Of course, it took time to reach this stage, but by the time I returned to the city last summer I started receiving the 'local treatment'. I became a regular at a local café called Denny Café on Corso Turati, where one waitress asked me to teach her one phrase of English each day. I finally felt Italian.

During my internship, I discovered that Turin is home to a large population of young professionals and that the social scene is very lively.

I lived in San Salvario, a quarter known for its nightlife and several high quality restaurants. To anyone thinking of moving to Turin, I'd recommend putting this area at the top of your list.

But my absolute favourite spot in the city has to be the Monte dei Cappuccini. On a good day, you're treated to a panoramic view the whole city with the background of the Alps. It's so peaceful, not to mention the perfect spot to take a selfie!

I found that Italians always make you feel welcome: the ability to accommodate a guest comes naturally to them. However, one way to ensure you are never completely accepted is to cook pasta with pesto, turkey and sweetcorn. I may have made that mistake, but I stand by that dish and have no regrets.

Food plays a central role in Italy: rather than fitting meals into your schedule, it's normal to plan around your meals.

At home in the UK, cooking and eating elaborate meals with friends was simply not a part of my social life. It seemed strange at first that in Italy, groups of 19-year-olds would meet to sit around a table, eating carbonara and chatting over a small glass of wine.

This wouldn't happen with people of my age in Britain, but it was so nice to feel like part of a family, sampling the authentic cuisine and – of course – speaking Italian.

It was thanks to my Italian friends that I learned to speak the language to a high level – but it didn't happen overnight. Throughout my first year in Turin, people seemed baffled by my 'unique take' on the Italian language.

I made so, so many mistakes, but I discovered that it doesn’t matter at all because that’s part of learning languages: making horrible, embarrassing, shocking mistakes, that nobody will ever remind you of (or perhaps they'll mock you about it at every opportunity… either way, you'll never make them again). Turin is known for its hot chocolate. Photo: Bhofack2/Deposit Photos

All in all, living in Italy taught me that it is important to be confident, independent, and to express myself. I feel personally better off due to spending time there, and grateful to have learned about a splendid culture which welcomes people from around the world.

One more thing – I nearly forgot to mention the chocolate! Turin is famous for chocolate (though perhaps not the blonde variety…) and is responsible for two fifths of Italy's total chocolate production. A cup of cioccolata calda from a Turin cafe is like drinking a mug of Nutella: it’s just wonderful.

The one thing my year in Turin didn't teach me was why Italy is so intent on hiding Turin from the wider world – few people from outside Italy appear to know anything about the city.

This doesn't make sense to me. Turin has delicious chocolate, beautiful views of the Alps, one of the largest collections of Egyptian artefacts outside of Cairo, a world class cinema museum in the Mole Antonelliana and a piece of my heart.

It’s perfect for a city break or a lifetime – one leads to the other!

Daniel Williams is an enthusiastic Welsh Italian speaker with ambitions to one day become Italian.

“I have lived and worked in Turin, where I fell in love with everything Italian. A piece of my heart will forever be in the former capital, but don’t worry I’m not aiming to leave random body parts in any other Italian cities. The Italians and Italy are wonderful and I want to share my experiences of the country.”

Want to write a guest blog or opinion piece for The Local Italy? Get in touch at [email protected]