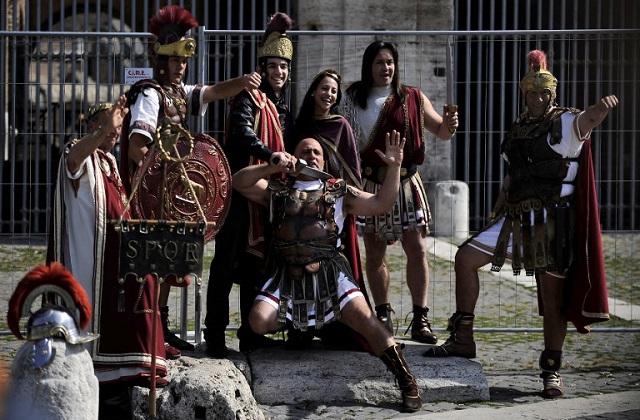 Rome cracked down on the gladiators (which is what they call themselves most of the time, despite usually dressing as Roman centurions) following a string of complaints accusing the actors of overcharging or even pick-pocketing unsuspecting travellers. Authorities booted them out of the capital's historic centre, with a hefty fine for those caught flouting the ban.

But a regional administrative court on Thursday overturned the ban, ruling in favour of a group representing centurions and street artists who had lodged an appeal.

Judges said that “contingency and urgent ordinances are to remedy unforeseen emergency situations” and that the situation regarding centurions and rickshaw drivers “did not constitute an emergency”.

In their decision, judges acknowledged that “the extraordinary context of the Jubilee Year” in 2016 had made extra security measures necessary, but that since this was no longer the case, the “indiscriminate and repeated bans” were not justified.

Raggi was quick to respond to the ruling, saying the capital could not be “held hostage” by the street artists. She added that the city was working on “a new regulation to protect the city”.

“The city cannot be held hostage by centurions and rickshaws. Change goes ahead. New regulation to protect the city.”

“The ban on figures like centurions near the monuments of central Rome serves to preserve the dignity of this prestigious area,” Rome's councillor for Economic Development, Tourism and Labour said in a statement, confirming that city authorities planned to work on definitive legislation to tackle the issue.

The battle between Rome's centurions and local authorities has been going on for years.

Back in 2002, a law obligated costumed 'street actors' to pass an exam, including English language and a general culture test, before they could work in the capital.

A viral video in 2015 showed a Romanian TV crew getting their wallets stolen by a group of Colosseum centurions who took €100 as compensation for a couple of photos in front of Rome's most iconic building.

The first ban in November 2015 introduced a €400 fine for those caught plying their trade without authorization, and applied to rickshaws as well as the costumed actors.

Updating these regulations was one of the first things mayor Virginia Raggi did after her election, imposing the €400 fines in her very first council meetings, and she has extended the ordinance twice since then.