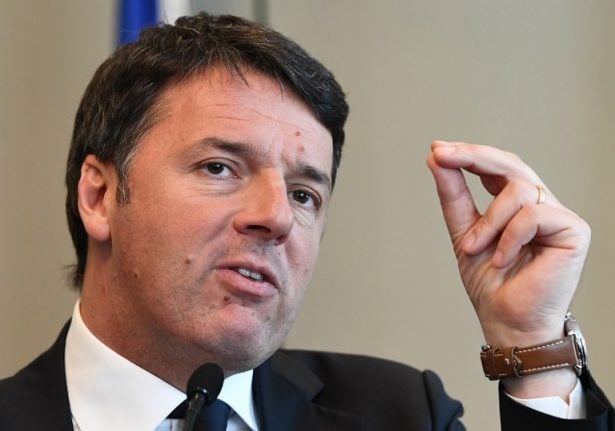 Renzi retook control of the Italian Democratic Party on Sunday. Photo: Emmanuel Dunand/AFP
Nicknamed “Il Rottamatore” (The Scrapper) for his pledges to cast away the old political guard, Renzi nonetheless fell short of his lofty goals during his stint as premier that began in 2014.
His relentless pursuit of a “simpler, more competitive and more courageous” Italy led him to call a referendum on constitutional changes in December aimed at streamlining parliament and transferring powers from the regions to the national government.
After his win on Sunday, which was largely expected, he tweeted: “It is a huge responsibility. I thank from the bottom of my heart those men and women who believe in Italy.

READ ALSO: The comeback kid: Matteo Renzi hot favourite to lead his party again
“This is not the second half of the same match, it's a new match,” he added in a victory speech.
At just 42 years old, the former mayor of Florence has made no secret of his ambitions — even at the expense of appearing ruthless toward his fellow Democratic Party leaders.
He pushed out former premier Enrico Letta to take his place in February 2014, having tweeted a now-famous “Enrico, don't worry” less than a month earlier.
Showing a tireless work ethic while his wife, Agnese, and three children stayed home in Tuscany, the former Boy Scout brought a boundless energy to his office, vowing to revive Italy's lethargic economy.
He managed to deliver significant labour market reforms and modest growth, while overseeing the granting of legal recognition to gay relationships for the first time.
But the recovery was not strong enough to pay any real political dividends, and alienated many on his party's far left, who broke away in February to form the Progressive and Democratic Movement (DP).
In response, Renzi has indicated he would be open to an alliance with Silvio Berlusconi, the millionaire former centre-right premier.
For many Italians, it was just the latest sign that he has the prime minister job once more in his sights.
This week, the cover of L'Espresso magazine showed Renzi dressed in a French-style beret at the front of a tandem bicycle, with a worried-looking Paolo Gentiloni, the current premier, at the back.
“Paolo, don't worry”, Renzi says.
Eyeing the prize
Although Renzi's constitutional referendum was handily defeated by voters, prompting him to quit as prime minister, it hasn't dented his ambitions.
Even while tendering his resignation after the referendum defeat, he claimed success in creating an Italy of “fewer taxes and more rights” in a speech that sounded to many like an election campaign launch.
Arguing that his party can win elections only by attracting centre-right voters, Renzi has taken a page from French centrist candidate Emmanuel Macron, widely considered the best-placed to win France's run-off presidential
election on May 7.
His associates have created “InCammino2017” accounts on Twitter and Facebook, directly inspired by Macron's En Marche! movement.
And Italian press reports say he's weighing a call for early elections this autumn, hoping to ride a pro-European wave he is expecting to sweep France and later this year Germany.
By AFP's Olivier Baube