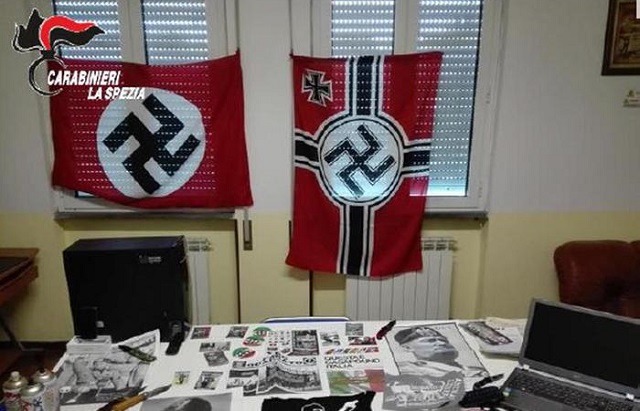 Some of the propaganda material found in the gang's caravan hideout. Photo: Carabinieri La Spezia

The gang of six are suspected of several arson attacks across La Spezia in northern Italy, and are believed to have carried out nighttime raids targeting migrants.

Police discovered knives, other blade weapons, and instructions for creating explosives in the group's caravan hideaway when busted the cell early on Monday morning. They also found a large stash of neo-Nazi propaganda, including two swastika flags.

Six people, all aged in their early 20's, were identified and now face investigation for various crimes including arson, criminal damage, and racial violence.

For around two years, the group had carried out nighttime raids over a two-year period, targeting migrants as well as Catholic charity Caritas, which has been active in assisting migrants across the country.

They are suspected to be behind two arson attacks on Caritas containers used to collect second-hand clothes to be given to migrants, as well as several acts of vandalism, including damage to plaques commemmorating Italian partisans and the daubing of swastikas on the walls of a local Democratic Party office. The latter incident, dating back to May 2016, kicked off the investigation.

Police also said they believe the group may have carried out acts of violence against migrants which went unreported, as its members discussed attacks on migrants in a WhatsApp group which they also used to attract new recruits.