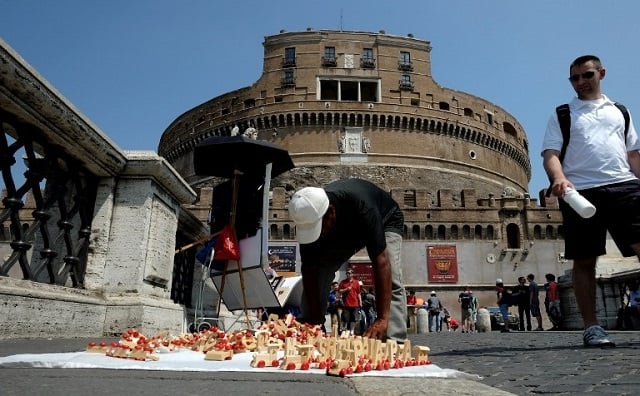 A group of street sellers blocked traffic in the capital in protest over the 54-year-old's death, the circumstances of which are unclear.

Some witnesses had initially said he had been knocked over by a plainclothes police officer on a scooter – a claim police said was untrue – while others said he had collapsed rather than being hit, possibly due to a sudden illness.

Emergency services were called but the man was pronounced dead on the scene at around 1pm on Wednesday.

“There is no direct link between the anti-illegal selling operation and the death of the Senegalese citizen, which took place about 500 metres away,” said Rome police in a statement, also sharing their condolences with the man's family and the Senegalese community.

The deputy director of Rome's police force, Antonio Di Maggio, said agents had been ordered not to pursue sellers and had only confiscated the merchandise.

Wednesday's protest took place on Via Arenula (marked in blue on the map below), where around 30 people blocked off traffic slightly north-west of the spot where the man died (marked in green, while Ponte Fabricio, where the police raid took place, is marked yellow). Rome prosecutors have opened a probe into the man's death, and an autopsy has been ordered, but for the time being no charges have been made.

The anti-illegal selling operation had targeted street vendors selling bags and wallets near the Ponte Fabricio in central Rome. In an earlier statement, police had said that “as well as representing an offence due to the lack of permits, [the illegal selling] was damaging from the point of view of maintaining order” in the historic area.

In total, sanctions amounting to 30,000 euros were issued during the operation.

READ MORE: The latest news and features from Rome