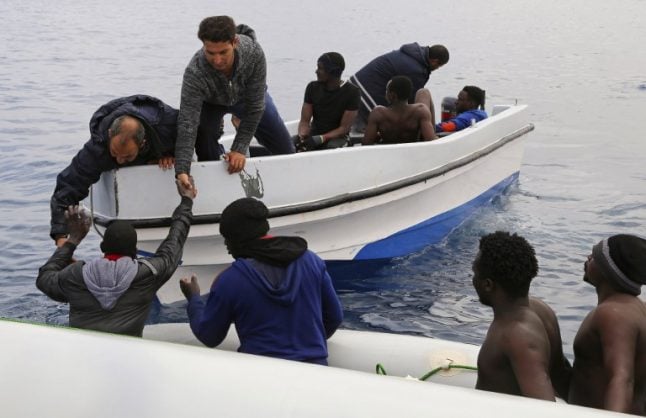 File photo of migrants being rescued from a sinking dinghy. Photo: AFP

“There are over 20 boats in difficulty off Libya and an already tense situation has worsened with people in the water,” said Mathilde Auvillain, communicator officer for SOS Mediterranee.

Charities Doctors Without Borders (MSF) and Save the Children were taking part in a senate meeting in a bid to clear the air after weeks of speculation over whether some of the rescue vessels may have links to traffickers in Libya.

NGOs have fiercely denied claims of collusion with smugglers made by Sicilian prosecutor Carmelo Zuccaro, who has suggested they are worsening Europe's worst migrant crisis since World War II – but also admitted he has no proof.

“We are under political attack, probably because we are giving a voice to those we save at sea, and pointing the finger at Europe for its failure to respond” to the crisis, said MSF search and rescue coordinator Michele Trainiti.

The MFS boat Vos Prudence disembarked six bodies recovered from the Mediterranean in the port of Catania Friday morning, five of whom were young women of African origin aged between 16 and 35.

“We think they were in the water for around a week, we can't be more specific because of the advanced state of decomposition of the bodies,” MSF nurse Elena Zandanel, 33, told AFP.

The furore has been stoked by the populist Five Star Movement and anti-immigrant Northern League, whose leader Matteo Salvini said this week that the rescues were little more than “a financial and commercial operation”.

Zuccaro appealed on Wednesday for more resources to expand his investigation, including intercepting the satellite calls made by traffickers, saying European Border Agency Frontex had intelligence of contact between NGOs and smugglers.

A Frontex spokesperson in Warsaw said Frontex had never accused the NGOs. “They want more resources, the resources should be used to save those risking their lives at sea,” said Trainiti.
“Frontex has said there is no proof linking us to traffickers, as has (anti-smuggling operation) EU Navfor med and the (Sicilian) prosecutor of Siracusa”, he said.

He also rubbished Zuccaro's suggestion the NGO boats were intervening to rescue people before they needed help.

“There's never a 'too soon' when you speak of rescues. According to the rules of the sea, as soon as one of these dinghies leaves land it is a vessel in distress, because it has over ten times the number of people it could legally carry.

The flimsy dinghies used by traffickers are launched from the North African coast with an average of 122 passengers crammed aboard.

More than 1,000 people have died or are missing feared drowned on the central Mediterranean crossing so far this year.

The debate – which saw Prime Minister Paolo Gentiloni wade in Thursday to hail the NGOs – is distracting from the real issue, the chaotic situation in Libya which is forcing ever larger numbers of people to flee across the sea, Trainiti said.

“We are very worried the situation will get worse with the summer and good weather. The situation in Libya becomes more critical by the day, there are stories of prolonged violence, torture and rape, including the rape of entire families”.

Giancarlo Perego, director of the Migrantes foundation, said it was “right that prosecutors and the judiciary be vigilant and take note of the current situation in the Mediterranean, so that migrants are not victims twice over”.

“But indistinct political fire on the nine NGOs operating in the Mediterranean to save lives using the resources of banking and private foundations, of civil society, is hypocritical and shameful.”

By Ella Ide with Fanny Carrier in Rome