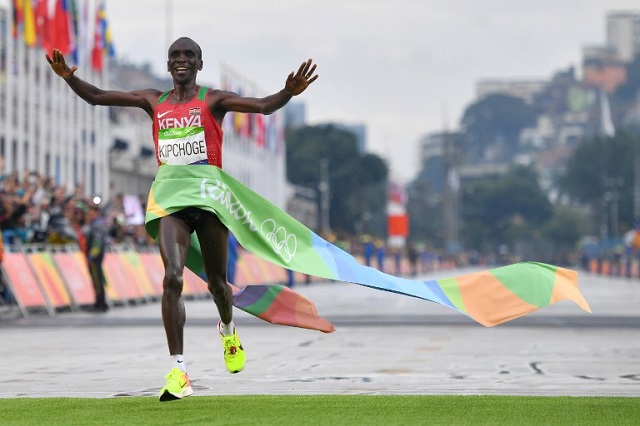 Eliud Kipchoge, one of the elite runners attempting the record. Photo: Olivier Morin/AFP

In their pursuit of sporting immortality the trio will need to set a ferocious pace of 4min 34sec per mile – seven seconds quicker than the pace of the existing world record of 2:02:57 set by Dennis Kimetto of Kenya at the 2014 Berlin Marathon.

In many respects it is the distance running equivalent of attempting to put a man on the Moon, requiring the sort of evolutionary leap against the clock that is usually only achieved over decades.

But increasingly scientists are convinced that the sub-two-hour marathon is achievable.

“People have been thinking about the magical sub-two-hour marathon for a long time,” said Wouter Hoogkamer, lead researcher of a study recently published by the University of Colorado, Boulder.

Hoogkamer's team set out a series of mathematical calculations demonstrating how an elite marathon runner could break the two-hour barrier.

“Our calculations show that a sub-two-hour marathon time could happen right now, but it would require the right course and a lot of organisation,” Hoogkamer said in the study published by the journal Sports Medicine.

Kipchoge, Desisa and Tadese were selected by Nike after an exhaustive analysis of their physical make-up and technique.

“We have spent a long time exploring many dimensions of their performance, like the maximum oxygen an athlete can consume; the critical speed, or threshold an athlete is capable of maintaining; and the energy required; to their economy of running,” a spokeswoman for Nike told AFP.

“We know that these runners are perfectly equipped and wanting to run something that has never been run before.”

The Colorado study estimated that to be successful, runners would need to wear shoes roughly 100 grams lighter than those worn by Kimetto during his 2014 world record.

Nike produced shoes to be worn by the athletes making the attempt, the “Zoom Elite”, pitched as the ideal blend of weightlessness, energy return and aerodynamics.

Preparations for the sub-two-hour attempt have been encouraging. At a test event in Monza, Kipchoge completed a half-marathon on the circuit in a time of 59min 17sec.

Even if the Nike-backed runners are successful their time will not be regarded as a formal world record by track and field's governing body, the IAAF, as it will not take place in officially sanctioned race conditions. Nike is unfazed by this.

“The course will be IAAF ratified and will meet to all marathon course requirements including independently measured course distance, start versus finish location and course elevation,” a spokeswoman told AFP.

Other observers question whether the sub-two-hour attempt even needs the stamp of approval from the IAAF.

Ed Caesar, author of the 2015 book “Two Hours: The Quest to Run the Impossible Marathon”, notes that Roger Bannister's iconic breaching of the four-minute-mile barrier in 1954 was frowned upon in certain quarters because of the Briton's use of pace runners.

“People thought it was cheapening to have two other guys helping Bannister, but we don't remember that,” Caesar told The Wall Street Journal.

“There are always ideas of what is sportsmanlike, but the fact is we are interested on whether it's possible to run a marathon in less than two hours.”