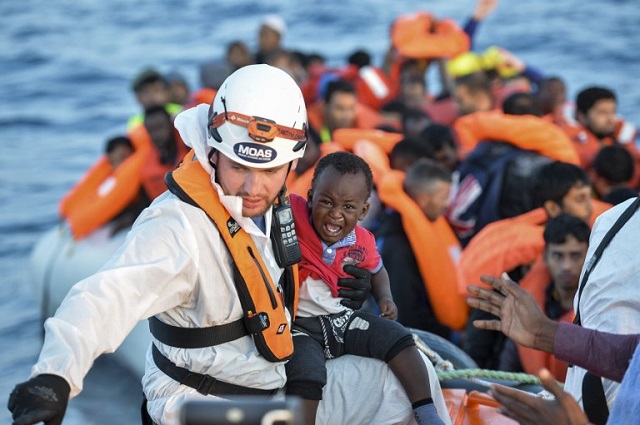 A member of the Maltese NGO MOAS helps a baby to board a rescue boat. Photo: Andreas Solaro/AFP

“I thank the volunteers, the coast guard and the navy for saving lives day after day. We are proud of them,” Gentiloni said in parliament.

His comments came as 561 migrants were rescued off the coast of Libya, and the body of a teenager was discovered in a boat, according to the Italian coast guard and NGOs.

Maltese organization MOAS cited witnesses who said the boy had been shot by traffickers who were after the cap he had been wearing.

NGOs deny a claim Sicily-based prosecutor Carmelo Zuccaro made last month that some charity boats rescuing migrants in the Mediterranean are colluding with traffickers amid Europe's worst migrant crisis since World War II.

Italian media reported meanwhile that the public prosecutor at Trapani in western Sicily had last year opened an investigation against an unnamed non-governmental organization for “aiding illegal immigration.”

The prosecutor's office did not immediately confirm the allegation, reportedly based on trafficker statements, that the NGO had had contact with the people smugglers.

At Catania in eastern Sicily, prosecutor Carmelo Zuccaro has made several declarations, including Wednesday to a parliamentary commission, alleging NGO-trafficker complicity, albeit without opening an official enquiry.

With support from Alfano as well as the anti-immigrant Northern League and the populist Five Star Movement Zuccaro has called for the monitoring of satellite telephone conversations and for the Italian navy to shadow ONG vessels.

Another Sicilian prosecutor, Francesco Paolo Giordano, for his part told a parliamentary commission he had interviewed “hundreds of people” without uncovering any trace of links between traffickers and ONGs.

Backing his view was admiral Vincenzo Melone, head of the Italian coast guard coordinating the bulk of rescue operations, who told the commission that NGOs and Italy's marine authorities were working in concert.

Predicting the migrant crisis would not go away soon, Gentiloni concluded that “in the long term it will be necessary to create development and growth in the countries of origin. In the short term, one must break the traffickers' monopoly on (migrant) flows.”

READ ALSO: No longer just a job: The unlikely crew saving lives in the Med