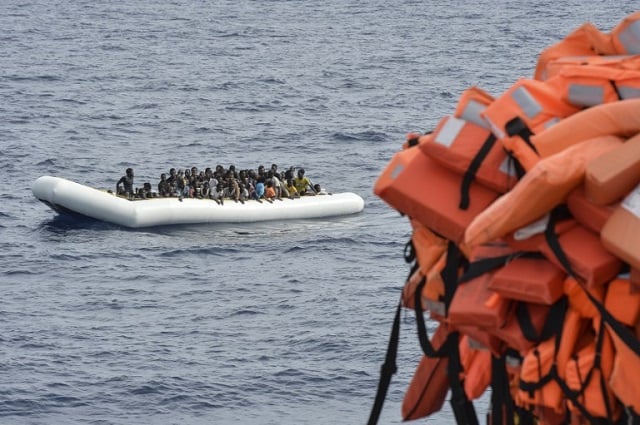 Up until 2014, people traffickers took migrants headed for Europe out into international waters on “mother ships” before transferring them to smaller boats.

But when Rome launched Mare Nostrum in late 2013, Italy began to catch smugglers in international waters, forcing the criminals to change tactics, stay in Libyan waters and put people out to sea in expendable rubber boats which easily sank.

Their business model changed too. In early 2015 many Syrians – who had previously accounted for about 25 percent of passengers departing from Libya and could afford to pay more for the journey – switched to the Balkan route. To recover their loses in the central Mediterranean, traffickers upped the number of passengers per vessel. They also largely stopped issuing satellite phones, meaning those in trouble could not call for help.

In 2014, about 70 percent of migrants were rescued by the Italian navy and coast guard, and 24 percent by commercial ships. But amid complaints it was serving as a “bridge to Europe” for migrants, Italy axed Mare Nostrum.

The safety line was cut, but departures continued, and after two shipwrecks killed 1,200 people in April 2015 the European Union beefed up its Frontex border control's Operation Triton and launched the Sophia anti-smuggling operation.

The tragedies also prompted the launch of privately-funded rescue vessels, with up to a dozen boats taking part at present. The larger boats combined rescued 26 percent of migrants in 2016, while the smaller ones handed out life jackets and gave emergency care to those in distress while help from bigger vessels arrived.

Italy's navy and coast guard still perform 40 percent of rescues, while the Sophia operation carries out 13 percent and Frontex 7.5 percent, according to the coast guard.

Despite their efforts, over 4,500 migrants died or were missing and feared drowned in 2016, and another 1,000 have met the same fate this year. Some succumb to the cold or dehydration, or are suffocated by fuel fumes, or trapped in overcrowded boats. Frontex estimates the business has a turnover of between four and six billion euros.

The European Union is in the process of training and equipping Libyan coast guards so they will be able to prevent departures or at least stop boats reaching international waters.

So far this year over 4,000 migrants have been intercepted, according to the International Organisation for Migration.

The idea is that they be escorted back to camps in Libya, and then returned to their home countries where possible.

But human rights organizations have said the chaotic situation in crisis-hit Libya makes it impossible to declare it a safe place to return migrants, while many of those fleeing war or persecution cannot be simply returned home.