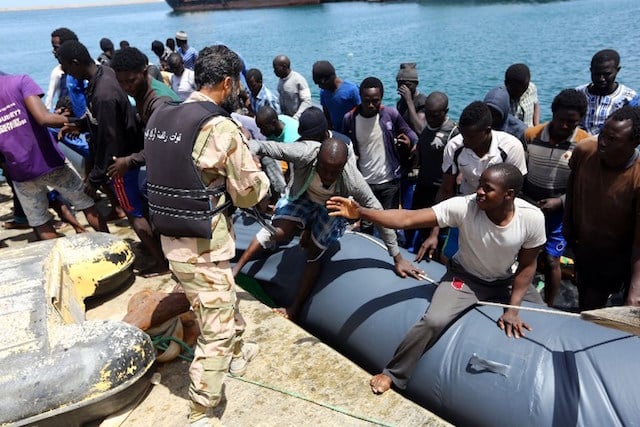 Migrants rescued by the Libyan coastguard in the Mediterranean off the Libyan coast arriving at the naval base in Tripoli on May 6th. Photo: Mahmud Turkia/AFP
Some 3,000 were picked up Saturday by the navy, coastguard, EU border agency Frontex and several NGOs, the coastguard said in a statement.
Some of them have already been taken to shore in Italy while others, including 730 onboard a ship operated by Doctors Without Borders (MSF), were on their way.
READ ALSO: The changing face of the Mediterranean migrant crisis
The Libyan coastguard told AFP it had picked up around 170 migrants off Tripoli on Saturday, but had failed to rescue others “due to a lack of means”.
The rescues came a day after around 3,000 others were found floating in rubber boats and on makeshift rafts after having left Libya, heading towards Italy.
The International Organization for Migration meanwhile said fishermen had rescued 371 migrants on Friday off the coast of the Libyan town of Zuwara.
Italy and Libya have moved to boost cooperation in recent months in order to cut the number of people risking their lives by attempting the dangerous Mediterranean crossing.
READ ALSO: Italy has reached an agreement with Libya aimed at curbing migration
The Italian government said in a deal signed with Libya in February that it would offer manpower as well as technical assistance to the Libyan coastguard.
Rome said this week that it had delivered two speedboats to Libya at the end of last month, with eight more due by the end of June.
Some 37,000 people, many of them sub-Saharan Africans, have arrived in Italy from Libya since the start of the year — a figure some thirty percent higher than a year earlier, according to the Italian interior ministry.
More than 4,500 migrants died or were missing and feared drowned in 2016, and another 1,000 have met the same fate this year.