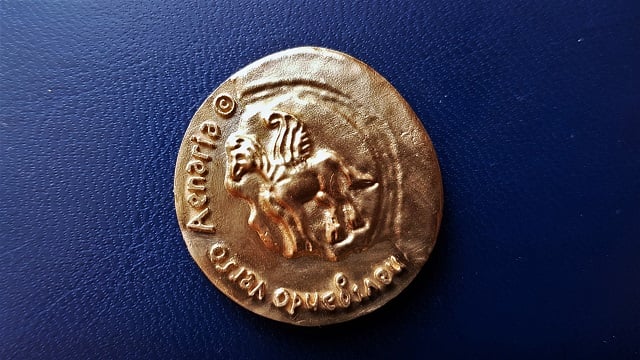 “The 'Pontese' will be the first real currency of the village itself,” explained Giuseppe Lanfreschi, the president of Ischia's consortium, as the new coin was unveiled on Saturday.

The coins, which feature designs inspired by the village's Roman history as a metalworks centre, have a value of 12 euros, but won't quite be replacing the euro.

Instead, thanks to a cultural initiative, residents and visitors will be able to use them as payment for entry at certain historical sights – or they can simply keep them as a souvenir. And as well as being used as a kind of currency, the coin serves to promote the history and culture of Ischia, often overlooked in favour of its more glamorous neighbour Capri.

“We created the coin in an artisanal way; it was made by local artists,” said Lanfreschi. “Above all, the coins have an emotion value; they are a piece of our Ischia that you can keep as a souvenir, or use in exchange for certain services or goods.” One side of the coin shows a winged griffin, the logo of Aenaria, the Roman name for Ischia. The other shows a Roman galaxy, just like the coins in use in ancient Rome.

For now, the coin can only be used at a limited number of sites in the hamlet of Ischia Ponte, for example to pay for entry to the submerged city of Aenaria.

But Lanfreschi said the village had plans to expand the use of the coin, so that it could be used to buy “a wide variety of objects” from Ischia Ponte. Aenaria takes its name from the Latin “aenum” meaning “metal”, and was a Roman industrial centre home to metalworks. It existed between the 4th century BC up to 130-150 AD, when it was suddenly destroyed by either a volcanic eruption or an earthquake.

Today, the town lies submerged at a depth of nine metres, but visitors can explore the city's harbour and parts of the small town.

All photos, unless as otherwise stated, courtesy of Maria Funiciello.