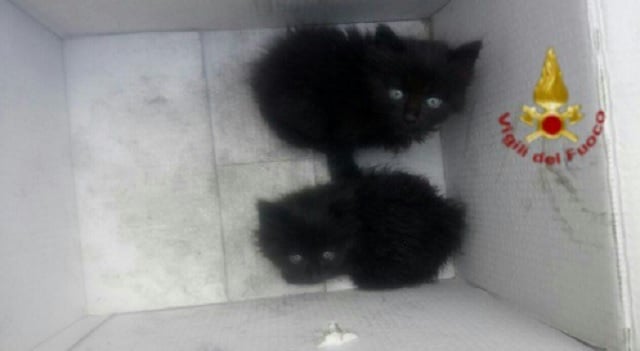 Schools remain closed in the area, while all homes and businesses within a 100 metre radius of the plant have been evacuated following the blaze. The fire broke out on Friday at the Eco-X depot, about 30km south of central Rome.

While experts await the results of tests assessing possible air and soil pollution caused by the blaze, firefighters had some good news to share with locals.

Three days after the fire broke out, they saved two tiny kittens who had been trapped in an attic near the heart of the blaze. The two black cats had found refuge in one of the buildings in the Eco-X complex, but survived the extreme heat and toxic fumes thanks to their hiding place in a wall cavity.

Firefighters extracted the kittens from the rubble, who are now under the care of a local vet.

VIDEOS: Firefighters save cats and dogs from earthquake rubble

Rome's health authority is carrying out analyses to as the level of dioxins in the air as well as determining if there was asbestos in the roof which went up in flames.

The fire is under control but firefighters on Tuesday morning were still extinguishing the last of the flames, which have lingered due to a lack of winds.

In the meantime, local authorities have banned residents from collecting or eating vegetables grown in a 5km radius of the disaster.

READ MORE: The latest news and features from Rome