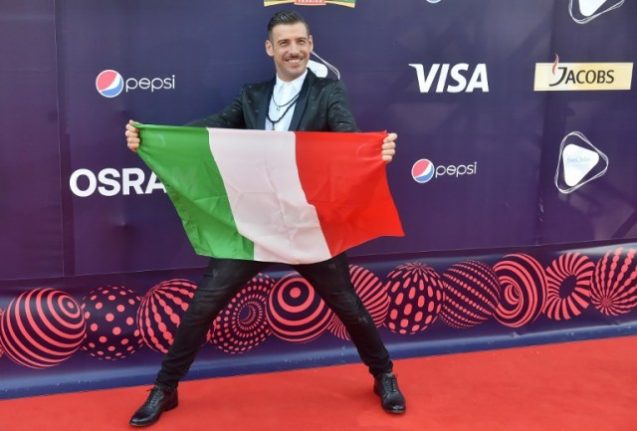 Flying the flag for Italy on the EuroVision red carpet. Photo: Sergei Supinsky/AFP

The slicked back hair, snazzily snug outfits and a slightly Freddie Mercuryesque moustache certainly help to explain his visual appeal.

But singer-songwriter Gabbani, 34, also hopes that including someone dancing next to him in an ape costume will help justify his current status as bookies' favourite to land a third title for Italy, after their 1964 and 1990 Eurovision successes.

Gabbani's slick video of his grooving “Occidentali's karma” (westerners' karma) song has already soared up the continental charts and he hopes his performance in Kiev on Saturday will garner those all-important votes from the national juries and TV audiences.

This year's highly original entry looks set to change the Eurovision fortunes of Italy which has skipped more than half of the previous 35 editions.

But for Italians, he has already landed the top prize.

Gabbani, whose steady girlfriend of five years is a tattoo artist, landed the Italian nomination by winning the Sanremo music festival, a five-night affair which keeps Italians glued to their television screens every February.

This year's Sanremo drew an average nightly audience of 10.8 million for a 50 percent national TV share – giving Gabbani, as the winner, legions of fans and plenty of popular momentum for his Eurovision assault.

READ ALSO: Everything you need to know about the Sanremo Song Festival

Created back in 1951 in the tourist resort of San Remo, a short hop from the French Riviera, the festival has helped launch several top Italian names from Eros Ramazzotti to Andrea Bocelli.

Traditionally, the festival winner earns a slot at Eurovision. Gabbani, born further along the Mediterranean coast at Carrara, famed for its marble, grew up in a musical environment – his parents running a shop selling instruments.

After releasing several low key albums he burst onto the scene at the 2016 edition of San Remo, winning the accolade of best newcomer with his feel-good dance entry “Amen.”

That success vaulted him into the senior competition and he promptly entered “Occidentali's karma”, co-written with, among others, younger brother Filippo.

The sheer energy the song exudes with its Gangnamesque choreography has seduced fans across Europe, despite some rather perplexing lyrical references of an oriental, but also scientific, political and philosophical nature.

“Lessons of Nirvana, there's Buddha in single line, break time for everyone, a moment of glory. The crowd shouts a mantra. Evolution stumbles. The naked ape is dancing.”

So goes the refrain with offers a clear nod to British zoologist and ethologist Desmond Morris, author of “The Naked Ape: A Zoologist's Study of the Human Animal.”

Fans keen to show their support can get the t-shirt bearing the legend “la scimmia nuda balla” (the naked ape is dancing). The song itself has already earned triple platinum status.

San Remo had been expected to crown veteran song queen Fiorella Mannoia, who had been the big favourite until a TV vote saw Gabbani just edge her out to become the first entrant to win both the junior and senior categories back to back.

Within 24 hours of his San Remo victory, Gabbani's performance had attracted 4.3 million YouTube hits in Italy alone, a record. Total views have since mushroomed to 110 million — unheard of exposure for a Eurovision entry.

“The magic formula is not just in the song but what the song transmits. That it is being viewed abroad is proof of that. They don't understand the words – and yet you feel the vibe,” says Gabbini.

After Eurovision, Gabbani will go on tour across Italy – without his simian sidekick.

“He's done his time. His role was to explain in as amusing a fashion as possible the point of the song. With all his fur he'll be fine in Ukraine,” the singer quipped.