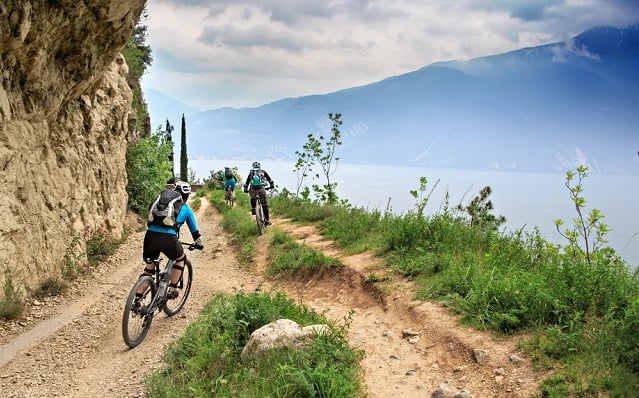 The country has plenty to offer cyclists, with long stretches of coastline, mountain ranges to explore, and hilly countryside from north to south. And taking to your bicycle is a great way to see parts of Italy you may not otherwise have thought to explore.

Here are some of the most picturesque and exciting bike rides to get you started on your very own Giro d'Italia.

Known by the Romans as 'the Queen of the Roads', the ancient Appia Antica connects Rome to the harbour of Brindisi. The route passes through the Caffarella park, a vast natural park that in the heart of Rome, and takes you past ancient monuments and fantastic Mediterranean pine trees. This cycle path has replaced the old monorail road which used to run along the coast and cliffs. The 24km route winds through eight different communes and breathtaking panoramas – with the option of taking off-road tracks for serious mountain bikers.

The Tuscan coastline from Scansano to Grosseto

This route stretches along 77km of Tuscan coast, famous for the long, sandy, and wild beaches; the clean water of the sea; and the colourful flower fields, with sunflowers, Mediterranean pines, and cypresses.

A nearby alternative is the Sentiero della Bonifica from Arezzo to Chiusi, which is almost entirely flat – perfect for beginners. This route takes you through Italy’s rugged southern Calabria region. While touring the area, cyclists should make the mountain climb to the Sanctuary of Our Lady of Polsi, a pilgrimage site and at times a meeting point of ‘Ndrangheta mafia bosses. Also in Calabria, this route perfectly showcases the regions's unrivalled rural landscape which boasts both mountains and an extensive coastline.

Try out this 48km cycling route around Italy's largest coastal lake, known as “circumpedalada” (literally 'pedalling in a circle'). And for those looking for more than cycling, there is also an annual triathlon.

Campo Imperatore is best known for ski holidays, but cyclists can also pedal their way between the slopes. Start in Santo Stefano di Sessanio and be sure to take in Castel del Monte, Piano San Marco, Colle della Battaglia and Rocca Calascio. The mountain passes of the Dolomites

The beautiful Dolomite mountains are a Unesco World Heritage Site, and the best way to explore them has to be by bike. The annual Maratona race is open to amateur cyclists, with a 175km course weaving through several mountain passes. It's split into several courses for different difficulty levels, each based around the Sella mountain group. If you're new to the sport, try the easier Sellaronda route, which takes you through picturesque villages in a clockwise direction around the mountains.

This cycleway follows the river Adda in Lombardy for almost 110km, and is mainly traffic-free. It provides a useful link between Lombardy’s lakes and the region’s mountains and the classic climbs around Bormio and Livigno.

READ ALSO: These are the 20 prettiest villages across Italy