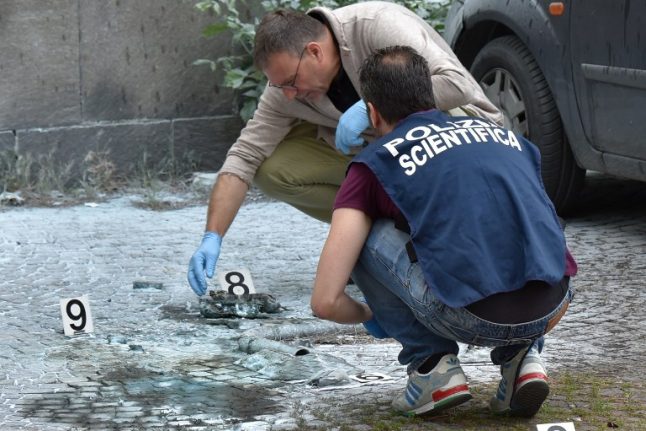 Scientific police works on the site of the explosion of a rudimentary bomb. Photo: Andreas Solaro/AFP

No injuries were caused by the explosion, which took place at 9:15, police confirmed to The Local.

“There were two separate incidents; the first on Viale Aventino, which was only a bag of sand, and the second in front of a post office,” a police spokesperson explained.

The spokesperson said there was no reason for residents or visitors to the Italian capital to panic, and that there were no “no-go areas”. Police works at the site of the explosion. Photo: Vincenzo Pinto/AFP

Only the affected section of Via Marmorata, close to the Piramide metro station, was cordoned off while forensic police carried out their investigation.

“There are no suspects or hypotheses [as to who might be behind the explosion], and there was no warning beforehand,” police told The Local. “We are carrying out an investigation and the explosive device will be analyzed; then we will have more answers.”

The map below shows the location of the post office on Via Marmorata. Fire fighters, police, and explosive experts were on the scene, and Rome's prosecutors have opened an investigation.

City authorities confirmed that while a section of Via Marmorata had been cordoned off, there was no impact on traffic in the city.