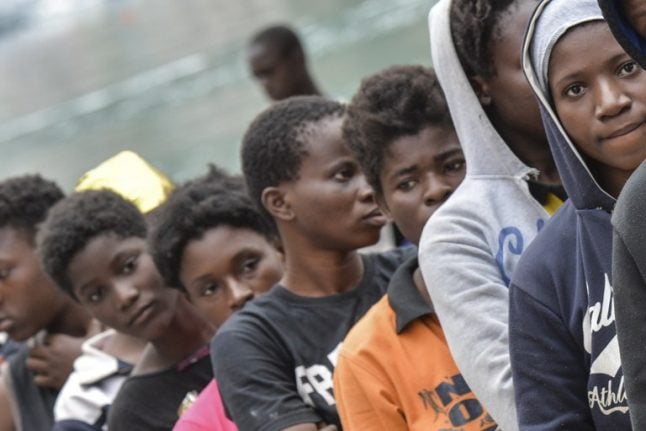 But as the government steps up its efforts to send more migrants home, many who pinned their hopes on asylum appeals are growing increasingly worried.

This week an official decree paved the way for the creation of 11 more repatriation centres capable of housing 1,600 people pending deportation, on top of the four currently in operation.

At Ponte Galeria, in courtyards easily mistaken for cages, Khadigia Shabbi, 47, can barely hold back her tears.

“Here we are dying,” the former Libyan university lecturer says.

Arrested in Palermo at the end of 2015 and convicted of inciting terrorism, Shabbi protests her innocence and has requested asylum.

She is not alone. Half of the 63 women at Ponte Galeria, which AFP was able to visit, have made similar requests. Several are from Nigeria, having crossed Libya to reach Italy. But there are also Ukrainians and Chinese.

The country is sheltering more than 176,000 asylum-seekers, with about 45,000 migrants arriving since January 1st – a 40 percent rise on the same period last year – and officials are bracing for another summer of record arrivals.

To cope with the influx – and to deter others from coming – Interior Minister Marco Minniti pushed through parliament last month a plan to increase migrant housing and provide new resources for expelling those who have come only to seek work.

The plan includes creating fast-track asylum appeal courts for the roughly 60 percent of migrants who have their initial requests denied, in order to reach a binding decision that gets them out of the country sooner.

Between January and April, Italy expelled 6,242 people who did not have the right to stay, an increase of 24 percent on the same period last year. But the figures include more than just people rescued from the overcrowded boats coming daily from Libya who have failed in their asylum requests.

Many were sent home directly because of repatriation agreements, such as those with Tunisia, Egypt or Morocco, while others were expelled after overstaying their student or tourism visas.

But despite Italy's new efforts to deter migrant arrivals, many say they won't give up trying.

“If they expel me, I'll come back afterwards. I say this honestly – there is nothing for me back there,” said one woman at Ponte Galeria.

For Luigi Manconi, a senator in the ruling Democratic Party, such centres have never functioned as well as intended, and often detain people who should not find themselves behind bars.

Many of the Nigerians at the centre, for example, were victims of prostitution networks. “They should be being helped, not incarcerated,” he said.

While they wait the women at Ponte Galeria complain mainly about the monotony of long days.

“Here, we don't do anything, no classes, no sports, no activities,” said Pepita, a Filipina who said she had spent more than 20 years in Italy.

The French company that runs the centre, Gepsa, provides meals, underwear and hygiene kits, along with offers of psychological support. For the rest, the women at Ponte Galeria can rely only on themselves.

READ ALSO: 'In a refugee home, right and wrong don't always go hand in hand with the law'