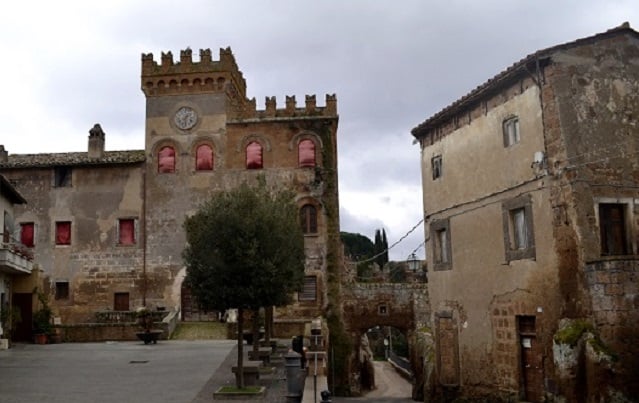 One of the castles up for grabs. Photo: Agenzia del Demanio

Old houses, inns, farmhouses, monasteries and ancient castles are all up for grabs – and you won’t have to pay a penny. In total, 103 sites are available, dotted across the country from north to south.

The only catch is that those who take up the offer will have to commit to restoring and transforming the sites into tourist facilities, such as hotels, restaurants, or spas. Successful applicants will get an initial nine-year period to work on their project, with the possibility of extending it for a further nine years.


This former school in Puglia could be yours. Photo: Agenzia del Demanio

The State Property Agency and Ministry of Cultural Heritage announced the project as part of Italy’s Strategic Tourist Plan, aimed at relieving some of the strain on the country’s most popular and overcrowded areas and promoting lesser-explored destinations.

Canal city Venice in particular has attempted to clamp down on mass tourism with a set of radical measures from limiting accommodation to publicizing less well-known areas.

“The project will promote and support the development of the slow tourism sector,” Roberto Reggi from the State Property Agency told The Local. “The goal is for private and public buildings which are no longer used to be transformed into facilities for pilgrims, hikers, tourists, and cyclists.”


A villa and former summer residence along the Via Francigena. Photo: Agenzia del Demanio

The buildings are all located off the beaten path, with 44 of the sites situated along historic or religious walking routes, and the remaining 59 along cycle paths.

They can be found along the Appian Way (a Roman road connecting the capital with Brindisi on the southern coast), the Via Francigena (an ancient pilgrimage route stretching from Rome to the northern border), and several of Italy’s cycling routes.

On the list of available properties, you'll find old schoolhouses, farmhouses, ex-convents and defence towers overlooking coastlines or countryside. And there are a few unusual finds.

In the Marche region, you could get the 13th-century Castello di Montefiore, built to defend the town of Recanati against attacks from neighbouring towns.

And not too far from Rome, you could opt for the Castello di Blera in Lazio, an 11th-century property built by a local noble family and perched on a cliffside, with many of its original medieval features still intact.

To get your hands on the sites, you need to have a clear plan of how they'd be transformed into a tourist facility.

The government is targeting entrepreneurs, co-operatives and businesses primarily made up of under-40-year-olds, who are eligible for an 'Art Bonus'. Successful applicants will get the rights to the property for nine years, with the option to renew the contract for a further nine.

And entrepreneurs with a concrete proposal for turning the sites into a tourist facility could be given a 50-year lease in some cases.


In Spoleto, Umbria you can find this gem. Photo: Agenzia del Demanio

After the initial 100 properties this year, a further 200 are set to be included in the project over the next two years. Full details of the project can be found (in Italian) on the State Property Agency's website.

Italy has turned to the public to help restore its historic sites before.

Over the past two years, the 'Lighthouse Project' has seen the Italian government auction off around 30 historic lighthouses to investors in return for converting them into hotels and tourist facilities.

The list included fortresses, two Venetian islands and the castle which hosted Tom Cruise's Scientology wedding, and again, investors were only allowed to use the sites for tourist purposes.