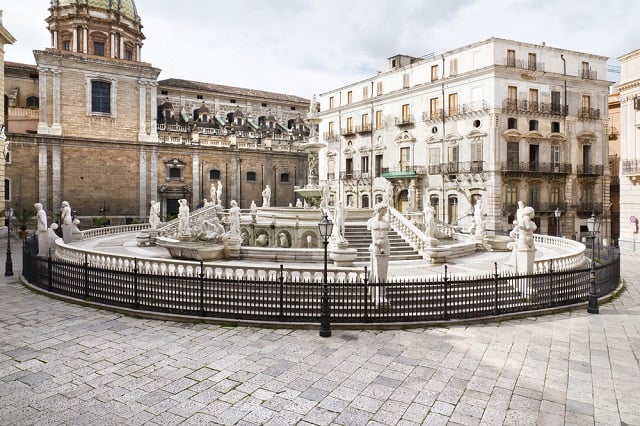 Just a stone's throw away from the Colosseum and Roman Forum lies Monti, a one-time working class district which is loved by locals and tourists alike. The main square is perfect for watching the world go by – sit outside one of the bars for a drink before exploring the rest of the district, from vintage shops to delicious, reasonably priced eateries.

When is a square not a square? In this piazza's case, when it's an oval. The reason for the unusual design is that the piazza follows the shape of the city's old Roman amphitheatre. It's walled off but reachable through one of four gated entrances, with market stalls at the weekends.

This square has everything you could ever want from a piazza and much more. As well as cafes, restaurants, and an art museum, it houses an ancient amphitheatre – you can still see the rows of seating and it continues to be used for shows. It's named after the town's patron saint, also honoured in a column monument on the square.

In the heart of the Umbrian town of Gubbio, this piazza treats you to incredible views and can be accessed via a public lift. It's home to two impressive palazzi, which now house the town hall and museum, and every year on May 15th it hosts the crazy Corsa dei Ceri or Candle Race, which sees costumed competitors race to carry three giant candles around the town.

Not far from the famous two towers and in the student district of this university city, Bologna's Piazza Verdi is a perfect place to unwind on a summer evening before heading out to one of the nearby bars.

READ MORE: Why Bologna should be the next place you visit in Italy

Capri has been a favourite coastal getaway since the days of the Roman Empire, and the main square (nicknamed La Piazzetta, or 'the little square') is a popular meeting spot. Lined with cafes, you'll also see the famous clock tower, and if you look carefully, in the town hall's courtyard, you'll find a plaque in honour of British journalist Henry Wreford who, the story goes, came to the island for a day and ended up staying fifty years. Who can blame him?

This has to be one of Italy's best places for sunset-watching. Hike there or take the bus in time for dusk for the best panoramic views over the Renaissance city. There's also a replica of Michelangelo's David statue, and plenty of spots for a picnic.

Two quirky features about this square are the fact it is built on a steep slope and that you'll see a mix of buildings from different ages. It's been a marketplace for decades, with special antiques fairs twice a month, and in June and September it hosts a medieval jousting tournament.

Often cited as Europe's largest seaside square, Piazza dell'Unita is a lively spot in the centre of the northern city. Built when Trieste was a strategic location in the Austro-Hungarian Empire, you'll find all the city's fanciest and most important buildings here, and on summer nights, the square occasionally doubles up as a concert venue. Worth a visit if you're at all interested in architecture.

You've heard of walks of shame, but this piazza is also known as 'Square of Shame'. The reason is the central fountain and its statues of nude nymphs, mermaids, and humans in various poses. Take a relaxing stroll around, stop in one of the cafes, or wander inside some of the municipal buildings to see the elaborate architecture.

Sure, Saint Mark's Square itself is grand and beautiful, but nestled between the Doge's Palace and Biblioteca Marciana lies this pretty alternative, boasting views out to the lagoon and enormous pillars topped with statues of the symbols of Venice: the lion, and Saint Teodora of Amasea.

'Cistern Square' might not sound like a must, but its a highlight of this medieval Tuscan town, and derives its name from a 13th-century well which is still the centrepiece of the square. Again, this isn't actually square-shaped, but triangular, and boasts three impressive towers as well as Romanesque and Gothic palazzi.

READ ALSO: These are officially the 20 prettiest villages across Italy