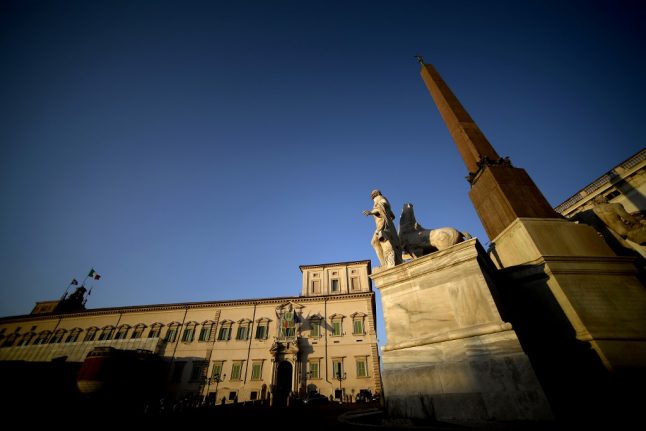 The official name of the country is ‘the Italian Republic’.

Up until the Second World War, Italy was ruled by kings. But in June 1946, Italians voted to abolish the monarchy in a referendum, and the country became a democratic republic.

The ‘First Republic’ lasted until around 1992, when a series of scandals rocked Italy’s major political parties. The period from then until now is known as the Second Republic, because of the major changes to the parties, but there was no constitutional change.

The president (currently Sergio Mattarella) is the head of state, though this is a largely ceremonial role. If you want to get specific, Italy is a constitutional republic. The constitution – a set of 139 articles which establish the basic ground rules of society – came into effect in 1948.

The articles are divided into three categories: fundamental principles, rights and duties of the citizens, and organization of the Republic.

It is very difficult to amend Italy’s constitution; this is to stop would-be dictators replacing it with a version that gives them too much power. However, it’s not impossible and a total of 13 amendments have been made since it was first drawn up. The Italian Constitution (L) and the swearing-in oath are pictured on the desk of Italy’s president prior to a new Cabinet swearing-in ceremony at the Quirinale palace in Rome. Photo: AFP

Laws or court rulings can be challenged if seen to conflict with an article of the constitution. The Constitutional Court, made up of 15 judges (the president, parliament, and judges of other courts elect five each), decides on such cases.

There are three branches of power in Italy: executive, legislative, and juridical.

The executive power is in the hands of the Council of the Ministers, i.e. the Italian cabinet, presided over by the President of the Council – more commonly known as the Prime Minister.

The ministers are responsible for executing laws and other political decisions. This is usually done by presenting bills to parliament, but can also be done by passing decrees – this happens in cases of urgency, or if parliament gives the council the authority to do so. The legislative power belongs to parliament, whose main job is to make laws (more on how this works later).

Parliament can also make amendments to the constitution, and is responsible for reviewing and guiding the government.

Meanwhile, the judiciary power belongs to judges, who are responsible for implementing the laws passed by parliament. They are not elected but are chosen based on exam results and internal commissions, and they serve for life.

The president is not elected by the people

Italy’s presidents are elected by secret ballot by parliament and regional representatives. They serve seven-year terms, and the reason for this is so that they won’t be re-elected by the same parliament (both houses have five-year terms).

Only two presidents have ever been elected to a second term: Mattarella, who was persuaded to take up the mantle again in January 2022 in the absence of any viable alternatives; and Giorgio Napolitano.

Napolitano agreed to stand again in 2013, another period of economic and political crisis for Italy, in order to guarantee continuity. He resigned in 2015.

Any Italian citizen aged over 50 can stand, but they must resign from any other public office before officially becoming president.

The president has some key duties such as naming the prime minister (though this usually happens after a general election), calling for elections, calling referendums, and officially putting laws into effect (though they are created and passed by others).

Italy’s parliament is made up of two houses which both have equal power: The Chamber of Deputies (or Lower House) and the Senate (Upper House).

The Chamber of Deputies currently has 630 members, and only Italian citizens aged over 25 can stand for election. The Senate currently has 315 elected members, who must be at least 40 years old to stand.

Those numbers will change come the next elections, however, as Italians voted in a September 2020 constitutional referendum to reduce the number of parliamentarians to 400 and the number of senators to 200.

In both cases, members are elected for five-year terms, which can only be extended if Italy goes to war. There are also a few senators for life, including former presidents of Italy and others appointed by presidents for outstanding merit in their field.

To create a new law in Italy, a bill needs to be passed by both Houses. They must both agree on all amendments made to the bill – which is one of the reasons bills sometimes end up stuck in gridlock for years.

Under an electoral law introduced in 2017, Italians get two votes, one for each of the houses, and can vote for different parties in each if they wish. In total, 37 percent of the seats in each house will be allocated via the first-past-the-post system (directly elected), and 64 percent proportionally (indirectly elected based on lists).

So some seats will be filled by candidates directly elected to represent their local constituency, with the rest divided proportionally between each party depending on their performance nationwide.

In order to gain the seats awarded through proportional representation, parties must get a minimum of three percent of the vote in both houses; for coalitions, that figure rises to ten percent.

The only exception to this is the senators for life.

Another interesting fact is that Italy is one of the only countries in the world to reserve seats (currently 12 in the Chamber of Deputies and six in the Senate – this will be reduced to eight in the lower house and four in the upper house come the next election) for Italians who live abroad. All Italian citizens aged over 18 can vote for members of the Chamber of Deputies. When it comes to Senate elections, however, the voting age rises to 25.

This anomaly has been criticized as one of the reasons Italy’s legislation is seen as skewered towards protecting the older generation.

Voices from several of the main political parties have called for the age to be lowered to 18 – with some suggesting that the right to vote be extended to 16-year-olds.

Italy has many different political parties, some of which are only active in certain regions.

After World War II, Italian politics was largely dominated by the centrist Party of Christian Democracy and the left-wing Italian Communist Party, though several other smaller parties enjoyed significant influence.

That was until the 1990s, when Italian politics was rocked both by the collapse of Communist regimes across Europe, and the Mani Pulite (Clean Hands) investigation into political corruption in Italy – which caused huge damage to the reputation of all the main political parties.

After that, the Italian Communist Party became the Democratic Party of the Left, a predecessor of today’s Democratic Party, while the Party of Christian Democracy faded into political obscurity. This paved the way for new parties, and the Northern League (now just the League) and Forza Italia were among those which arrived on the right wing. Italian voters have plenty of parties to chose from. Photo: Miguel Medina/AFP

Today, the Democratic Party, the League, and Forza Italia are considered three of the five main parties, together with the Five Star Movement, an anti-establishment party which claims to be neither left nor right and was founded in 2009, and the Brothers of Italy, a far-right party with neo/post fascist roots formed in 2012 that now looks set to lead a right-wing coalition government after the next general election.

Other significant parties include: the centre-right Popular Alternative; the pro-EU +Europa; the Liberal Popular Alliance and the centrist Civic Choice.

And if that sounds confusing, just remember there are plenty more minor parties, as well as several which are confined to specific regions.

Italy was only unified in 1861, and its 20 regions more or less correspond to the historical regions. Italy is further divided into 110 provinces and almost 8,000 comuni.

The majority of the regions don’t have much power, particularly when compared to federal states such as Germany. They keep only 20 percent of tax revenue, and the constitution grants them ” legislative powers in all subject matters that are not expressly covered by State legislation”, which in practice doesn’t amount to much.

But five regions (Aosta Valley, Friuli-Venezia Giulia, Sardinia, Sicily, Trentino-Alto Adige/Südtirol) have special status, meaning their governments have special constitutional powers and greater control over local laws and money. If you look at a map, you’ll see these regions all lie on Italy’s borders, and the special status helps them preserve cultural differences. Presidents from the special status regions can also join in sessions with the Council of Ministers when issues relevant to them (rather than general issues affecting all the regions) are being discussed.

If you thought this might make the other regions jealous, you’d be right, and in the north-eastern regions in particular, there is strong support for a similar status.

Italians are historically extremely politically engaged. Though voting hasn’t been compulsory since 1992, voter turnout has only dipped below 80 percent in the past two elections.

There are signs that voter turnout in Italy is now on the decline. In 2018’s general election, it reached a historic low of just under 73 percent.

You can find all the latest political news from Italy here.