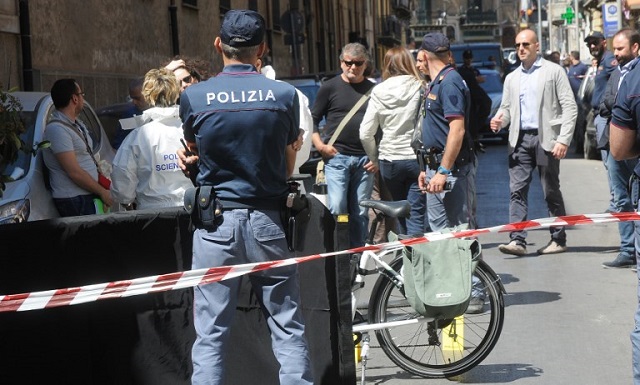 Police work on the street where the killing took place. Photo: Alessandro Fucarini/AFP

Giuseppe Dainotti, 67, was shot in the head as he cycled along a street in Palermo, almost 25 years to the day since anti-Mafia magistrate Giovanni Falcone was blown up in an explosion on a motorway on the Italian island.

READ MORE: How the brutal murder of an anti-mafia hero altered Sicily

Photographs of the crime scene evoked decades of violence in the Sicilian capital, showing Dainotti's body covered by a sheet, only his shoes on show, and the white bicycle he was riding lying where it fell.

Palermo prosecutor Francesco Lo Voi said the slaying was a warning to the state that Cosa Nostra (“Our Thing”) may have been laying low, but was far from beaten.

“When some people claim the Mafia no longer exists or has been destroyed, something always happens to confirm it is still there,” he said.

“When necessary, it shoots again, in a clear and symbolic way,” he said.

Falcone's murder in May 1992 and that of fellow magistrate Paolo Borsellino in a separate bombing in July the same year sparked a vast crackdown against the Mafia which landed many of its key figures behind bars.

The once-powerful Sicilian Mafia has largely been surpassed in recent years by the notoriously ruthless 'Ndrangheta in Calabria and the Naples-based Camorra.

The last high-profile murder saw a lawyer beaten to death by members of the organised crime group in 2010.

Witnesses who called the police after hearing the gunshots said they thought Dainotti, who was released from prison in 2014 after serving time for murder, was executed by two killers who pulled up alongside him on scooter.

The slain gangster was believed to be close friends with Salvatore Cancemi, a high-ranking Mafia boss involved in the preparations and executions of the murders of Falcone and Borsellino.

In 1993 he turned himself in and became a police collaborator – describing among other things how feared boss of bosses Toto Riina ordered French Champagne to celebrate Falcone's death – and died in hiding in 2011.