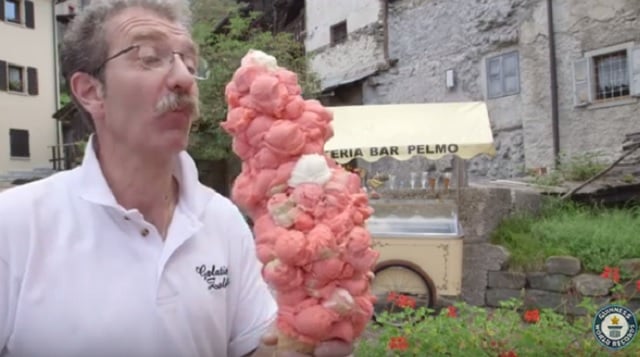 Groups and individuals from up and down the country lay claim to some impressive – and some frankly bizarre – world records. We celebrate 18 records which Italy can be proud of.

Most ice cream scoops balanced on a cone

Italian gelato maker Dimitri Panciera, from Veneto, balanced a record 121 scoops of gelato on a cone, breaking his own previous world record of 109. He claimed the secret to his skill was in the artisanal gelato he used, allowing the scoops to hold together.

It will come as no surprise to anyone who's been invited to an Italian dinner party that the Italians are world leaders when it comes to making huge portions of food.

In May 2015, 300 Italian bakers got together in Milan to make the world’s biggest decorated cake, which measured 16.46 metres by 13.94 metres and weighed over a tonne. It was decorated with a map of Italy, including edible sugar sculptures of its best known monuments such as the Leaning Tower of Pisa and the Colosseum. Too good to eat?

A giant tiramisu was whipped up in the northern town of Gemona by another team of 300, with 30 pastry chefs on hand to ensure the recipe was followed correctly. Spectators watched as 750 litres of coffee, 1000 kg of different kinds of cream, and 250 kg of sugar were mixed together to create the tiramisu. A crane had to be used to weigh the 3,015 kilo dessert. Proving that Lego isn't just child's play, a team of 18,000 volunteers spent five days working on building the world’s tallest ever lego tower. The 35.05 metre high tower used over half a million of the small coloured bricks. But it was more than just an impressive feat of construction – a spokesperson for Lego said the company would donate almost €25,000 to an urban development project in honour of the tower.

Religion remains at the heart of Italy's Easter celebrations, but that doesn't mean they don't enjoy newer holiday traditions such as chocolate eggs. The tallest chocolate Easter egg measured 10.39 m (34 ft 1.05 in) – that's taller than an adult giraffe – and was presented in a shopping centre in Tosca, northern Italy. It weighed a whopping 7,200 kg.

Longest pizza…three times in a row The longest pizza ever is cooked up in Naples. Photo: AFP

Pizza chefs and volunteers toiled for 16 hours in Rende in Calabria in 2015 to produce a 1.229 kilometre pizza, smashing a record previously set by Spain. No doubt the team was delighted to bring the title back to the homeland of pizza, but the main motivation of the project was to raise money for a shuttle bus to help the town’s disabled and elderly residents get around. However, they only held their crown for a few days, before an enormous 1,595.45 metre-long margherita pizza at the Milan Expo broke the newly-set record.

And in 2016, the record was smashed again by a team of chefs in Naples, who cooked up a wood-fired pizza measuring 1,853.88 metres (6,082 feet). The ovens had to be specially created for the event, and all ingredients used were locally produced.

Italy can at least take half the credit for this one. Sixty French and Italian chefs put national rivalries aside to work on the longest ever baguette, which when finished measured 120 metres. The finished baguette was slathered with industrial quantities of Nutella.

One Italian, Alessandro Bonacorsi, has beaten his own world record for the longest tattoo session four times. During a mammoth 57-hour and 25 minute session, Bonacorsi inked 28 tattoos on different people.

Scared of heights? You should probably avoid the 374-metre Cesana Claviere Tibetan Bridge, the longest in the world which dangles at 30 metres above the ground in the Gorge of San Gervasio and at some parts reaches a height of 90 metres.

The heaviest baby born to a healthy mother was an Italian baby boy, who came into the world in September 1955,  weighing 10.2 kg (22 lb 8 oz). The boy was born to mother Carmelina Fedele in Aversa, not far from Naples.

Could this be where J.K. Rowling got the inspiration for half-giant Hagrid's massive flying motorbike? Italy's Fabio Reggiani built the world's highest functioning motorcycle, towering at 5.10 metres from the ground to the top of the handlebars. It was ridden along a 100-metre course at Montecchio Emilia.

There's a reason Rome's Colosseum is one of the world's most popular tourist attractions. Built in 80 AD, the five-acre site measured 187 metres by 157 metres at its widest points. Over the centuries, the gigantic structure was used to host gladiator tournaments, as a fortress, an aristocratic residence, and a concert hall. It recently enjoyed a massive refurbishment financed by shoe chain Tod's.

Moving on to the world of sport, Italian skier Ivan Origone became the world's fastest skier in 2016, shooting down the piste at 254.958 km per hour. He beat the previous world record of his brother Simone who had reached 252.632km per hour (156.978mph) the previous year.

Professional breakdancer Stefano Maso set the record for most consecutive headspins or ‘halos’, notching up 49 in a row. He had spent six years training for the record, spurred on by a rivalry with another member of his breakdancing crew. Maso performed the dizzying feat in a shopping centre in Treviso in front of a crowd of onlookers.

Most watermelons smashed with a punch

Finally, the most bizarre title on this list. Italian boxer Davide Cenciarelli punched 70 watermelons in one minute, a feat which earned him a spot in the Guinness Book of World Records. He smashed the watermelons live on Italian TV series Lo Show dei Record, in which Italians attempt to break weird and wonderful world records.