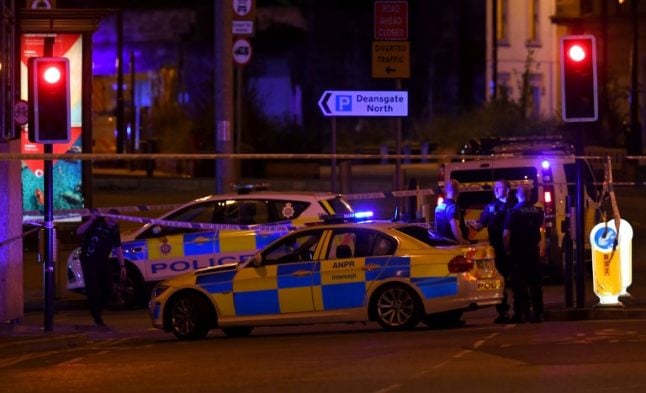 Police at the scene of the explosion in Manchester. Photo: Paul Ellis/AFP

Italy's Prime Minister Paolo Gentiloni on Tuesday expressed his solidarity with Britain and the victims of the attack, which took place immediately after a concert by American pop singer Ariana Grande and killed 22 people, including children. A further 59 people were left injured after the incident in Britain's third largest city.

“Italy is united with the British population and government,” said Gentiloni on Tuesday morning in a tweet, before holding a press conference to discuss the attack and upcoming G7 meet.

Speaking to press, Gentiloni labelled the explosion an “attack on Europe”, and said that G7 leaders would discuss anti-terror measures when they meet in Sicily later this week. The attack on Manchester came just weeks after two attacks using vehicles, one in London and one in Stockholm.

Foreign minister Angelino Alfano expressed “sorrow and pain” over the attack, and flags at the UK's embassy in Rome and the prime minister's residence flew at half mast.

Italy's Ministry of Foreign Affairs said it had opened a crisis unit to assist British authorities and verify whether any Italians were caught up in the incident, though there were no reports of Italians being involved, according to Gentiloni.

In a message to Queen Elizabeth, Italian President Sergio Mattarella said: “The news of the involvement of many young children in the attack, victims of this senseless criminal violence, was particularly painful as they had gathered for the happy occasion of a concert”.

Italy's main opposition party, the Five Star Movement, expressed their solidarity with the victims in a statement which labelled the attack “a terrible, inhumane act”.

Matteo Salvini, who leads Italy's far-right Northern League, shared “a prayer for the poor deceased”, but  appeared to use the attack to further his party's anti-immigrant agenda.

“While some prepare colorful chalks and marches for peace, I think the only possible response is zero tolerance, thorough checks, and the use of force,” Salvini wrote on his Facebook page. “In war, those who keep quiet or collaborate are complicit.”

British police have not yet made public the identity of the attacker, whom they believe died after detonating an explosive device. However, Prime Minister Theresa May said at around 11:30 UK time that police believe they have identified him.

No terrorist group had claimed to be behind the attack by Tuesday morning.

Rome has already upped security measures ahead of US President Donald Trump's visit on Tuesday evening, tightening controls at crowded areas including concert halls in the wake of recent attacks in Europe. The terror threat in Italy has been at level 2 for several months – the highest possible in the absence of a direct attack.