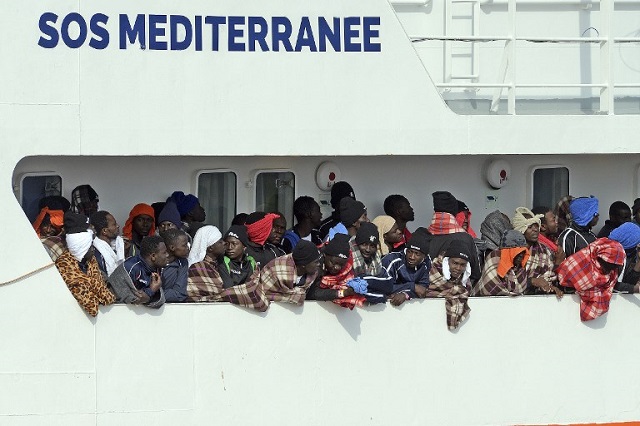 File photo of migrants aboard the SOS Mediterranee, one of the ships involved in Tuesday's rescue. Photo: Giovanni Isolino/AFP

The migrants, interviewed by the UN refugee agency and International Organization for Migration on Monday, said they had set off from Sabratah on Friday in a dinghy carrying 130 people.

Later that day they came across a dinghy which had almost sunk, with four men still clinging to it, who they rescued.

The survivors, four Nigerians, said they had set off from Tripoli a few hours earlier with 156 others, including many women and children, all of whom drowned when their rubber vessel deflated.

The remaining dinghy was rescued on Friday night by the Italian coast guard, which brought a total of 952 people saved in various operations to Taranto in southern Italy on Monday.

Neither the UNHCR nor the IOM was able to speak directly with the four surviving Nigerians and it would be very difficult to track them down now. Italy puts newly arrived migrants straight onto buses headed for reception centres throughout the country.

The country's coast guard said on Tuesday it had coordinated the rescue of 1,000 migrants of Libya travelling on six dinghies and two boats.

READ ALSO: Italy has reached an agreement with Libya aimed at curbing migration

They were pulled to safety by a Save the Children aid boat, the SOS Mediterranee and the German Jugend Rettet.

The crew of the Jugend Rettet said that during the rescue they had witnessed a boat identified as the Libyan coast guard firing shots at other migrant dinghies, forcing them back into Libyan waters.

Italy and the EU has undertaken to train and equip the Libyan coast guard to rescue or intercept migrants in Libyan waters. Migrants recovered are taken back to camps where they are often subject to extortion and violence.

More than 50,000 people have been brought to safety in Italy so far this year, the interior ministry said on Monday.

Over the same period, at least 1,254 people have died or are missing feared dead after attempting the perilous crossing, according to the IOM.