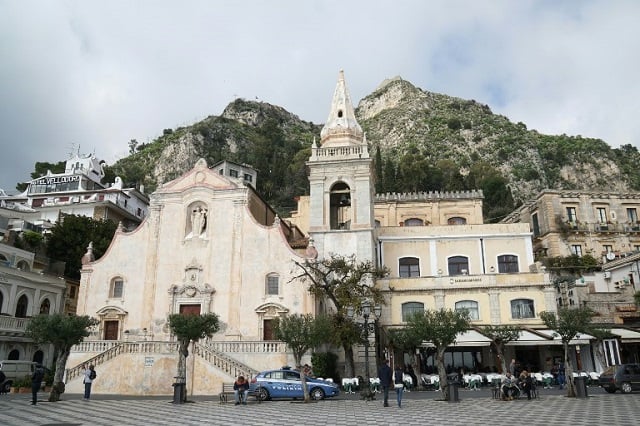 Drones will fly over Taormina for the Friday to Saturday summit and the army has the site in lockdown following an attack in Britain claimed by Isis and a mafia execution in broad daylight in Sicily on Monday.

Around 7,000 members of the security forces will patrol the coastal attraction's cobbled streets, which welcome more than one million visitors a year.

So it is unlikely that US President Donald Trump and wife Melania will enjoy a romantic stroll here in the same relaxed manner as famous sweethearts Richard Burton and Elizabeth Taylor once did.

Instead, security officials have declared the delightful promenade off limits for a lack of escape routes.The town's rich past has seen it play host to creative greats including Oscar Wilde, Ernest Hemingway and Richard Wagner. But US security demands for the visit have reportedly exasperated organizers, with Italian media saying Trump's motorcade is longer than the distances it will have to cover during the summit.

Taormina Mayor Eligio Giardina admitted he was likely the town's “most hated man” but said he had pulled off “the impossible”.

Border controls have been reinstated across Italy until the end of the month. And aid boats rescuing migrants in the Mediterranean have been told they will be unable to bring them to safety on Sicily, having to use the mainland instead.

Some 20 delegations are expected: the G7 countries will be joined by representatives of the European Union and the International Monetary Fund (IMF) as well as teams from Ethiopia, Kenya, Niger, Nigeria and Tunisia.

Their talks will be covered by 4,000 journalists, though the media will be cordoned off in nearby Giardini Naxos, a tiny resort town which sits on the shoreline below Taormina, on the eastern coast of Sicily.

Locals have been preparing a special G7 cocktail to welcome the leaders of Britain, Canada, France, Germany, Japan, the US and their own prime minister, Paolo Gentiloni, to the May 26th-27th event.

If there is any quaffing done it may be on Friday night, when the leaders will be serenaded at Taormina's ancient Greek theatre by the orchestra of the prestigious La Scala opera house in Milan. Some 170 doctors, nurses and paramedics will be mobilized along with seven rescue helicopters, and preparations have been made for any possible chemical or biological attack.

Only urgent cases will be admitted to the hospital of Taormina.

Organizers warn there is a risk that violent so-called “black bloc” demonstrators could infiltrate a protest planned for Saturday afternoon in Giardini Naxos.

But with the summit over, most of the leaders are expected to have jetted off by then – apart from those who stick around for a plate of Sicily's Pasta alla Norma or some of the island's legendary cannoli.