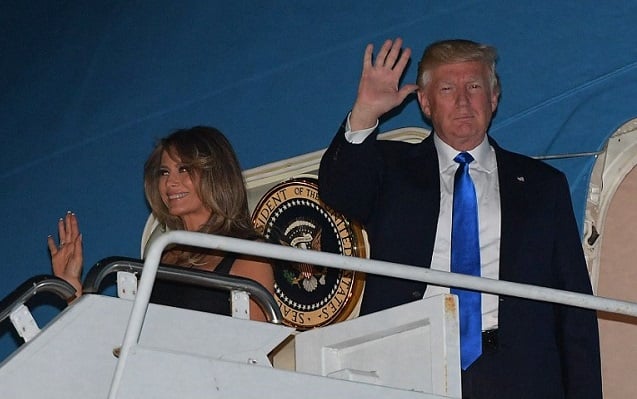 US partners in the G7 club of industrialised democracies meet in Sicily hoping for at least partial answers to those and other questions from a US administration still deciding how to implement its radical policy agenda.

Six months after his election, Trump jets to the Italian island for the final leg of a gruelling first overseas trip that has temporarily diverted attention from an uncomfortable domestic spotlight on alleged campaign collusion with Russia.

By the time Air Force One touched down at a US military base on the island, the presidential plane had already carried the new commander in chief to Saudi Arabia, Israel and the Palestinian territories, the Vatican and to NATO and EU headquarters in Brussels.

The 70-year-old may be forgiven if he is a little tired, but he will not escape a grilling from allies determined to divert him from a path they see as potentially disastrous for the architecture of the post-World War II world.

“The potential for friction is pretty great,” said Julianne Smith, an analyst at the Centre for New American Security (CNAS).

“These are leaders that are not yet convinced about the value of Trump-onomics. They don't understand it”.

Awaiting Trump in the ancient hilltop resort of Taormina will be ice cream makers who have been mixing up 'gelatos' in the shape and colour of his celebrated orange-blond quiff.

But the US president, who will not be the only new face on the G7 block, will be focused on meeting leaders he will likely have to deal with for the duration of his term.

These include the youthful duo of Canada's Justin Trudeau, with whom Trump has already tussled on trade and border issues, and new French President Emmanuel Macron.

The American leader made few friends with his interventions in the French presidential election campaign, which included suggesting a terror attack in Paris would swing voters behind Macron's far-right rival, Marine Le Pen.

Though Trump's disdain for the EU does not sit well with Macron, both men share an interest in economic innovation and pro-business reforms. They are due to have lunch in Brussels on Thursday which could set the tone for the summit in Sicily.

Opinion polls point to Britain's Theresa May and Germany's Angela Merkel also still being part of the G7 club after their respective upcoming national elections.

While May, who will also make her G7 debut on Friday, was the first foreign leader invited to the Trump White House, Merkel has made no secret of her reservations about his style and policies, particularly on climate change.

Merkel is a firm backer of the Paris emissions-curbing accord.

“I am still trying to convince the doubters,” she said on Tuesday, apparently alluding to Trump, who once described climate change as a “hoax” cooked up by China.

Efforts to keep the United States within the Paris framework will likely focus on convincing him that renewable energy forms can complement his pro-growth agenda, rather than tackling his scepticism head on.

Trump has said he will not make a decision on climate change until after the G7 and he has also backed off on suggestions that NATO might be an alliance that had outlived its usefulness.

But to date, the only concrete move on international trade has been a liberalising deal with China. Much remains up in the air but other G7 countries have interpreted that deal as a sign that flexibility and pragmatism will prevail over protectionist doctrine.

Hosts Italy meanwhile are hoping the choice of venue in the country's poorer south will help leaders focus on not only the need to promote inclusive growth but also on the issues raised by Europe's migrant crisis, for which Sicily is on the frontline.

However officials have had to ditch plans to include some language on the benefits of migration in the summit's final communique, apparently because of US reservations. Instead, Italy will concentrate on areas of convergence with the leaders expected to make a joint statement on terrorism after this week's
deadly attack in Manchester.

READ ALSO: Trump says Italy will 'pay up' for NATO