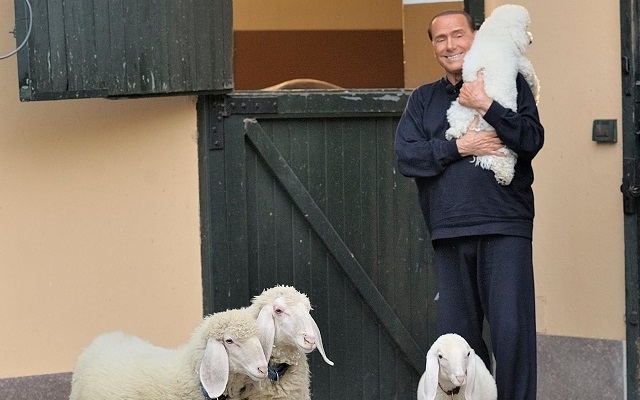 The 80-year-old spoke about his own “happy family” of dogs, horses, sheep and the other animals which live with him at his Milan villa, while discussing the recently founded 'Movement for Animals' on Italian TV.

The movement was founded in early May by Michela Vittoria Brambilla, an MP for Berlusconi's Forza Italia party, and the four-time prime minister has offered to lend it his full support as a founding member.

“Animals know how to love, how to be friends, and they will never leave you,” Berlusconi told the Rete 4 programme Dalla parte degli animali ('On the animals' side'), which is hosted by Brambilla. Berlusconi was filmed playing and running with his own pets in the grounds of his villa while sharing his support for the new movement.

The billionaire cited surveys which show 92 percent of Italians consider dogs to be their family members, with one in four people letting their pups sleep under the covers in their bed.

He added that he had asked women what they would do if forced to choose between their husband and pet dog – with almost three quarters saying they'd take their dog's side.

Berlusconi himself has 23 dogs as well as larger animals living in the park of his expansive villa in Arcore, Lombardy.

The main goal of the new movement is to get animals recognized in Italy's constitution as sentient beings, a change of status which would allow the law to inflict harsher punishments on those who mistreat or kill animals.

The group will run independently at the next elections, which look likely to be held this autumn, and the Forza Italia (FI) leader said that if they manage to achieve parliamentary representation, FI will vote in favour of their proposals.

Berlusconi is best known internationally for a string of legal troubles including the 'Rubygate' trial which saw him convicted but eventually found not guilty of abuse of office and paying for sex with a minor.

However, he has since reinvented himself as an animal rights campaigner, championing pet adoption schemes. In 2016, he announced that he had turned vegetarian due to animal welfare concerns.

The ex-PM is often pictured enjoying the company of Dudù, the white Maltese terrier brought into his life by 31-year-old partner Francesca Pascale. The dog has his own popular Facebook page which has been used in the past to promote Forza Italia. And in 2013, the general election campaign took a bizarre turn when both Berlusconi and his rival for the top job Mario Monti adopted dogs in an attempt to appeal to voters.

Berlusconi adopted a stray dog from Sicily's streets while campaigning in the south, and photos of him with his new pet quickly went viral on social media. Not to be outdone, economist Monti then adopted a puppy on live TV.

Twitter users seized upon the hashtag '#yeswecane', a play on then-US president Barack Obama's own campaign slogan and the Italian word for dog, 'cane'.