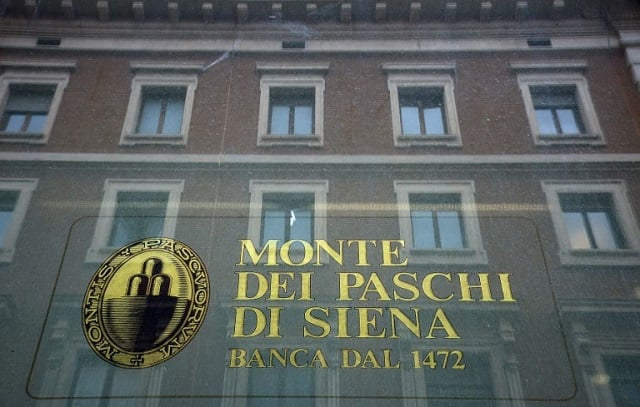 The logo of the Monte dei Paschi di Siena bank is seen on the window of a branch in downtown Rome. Photo: Filippo Monteforte/AFP

Founded in Siena in 1472, BMPS has been in deep trouble since the worst of the eurozone debt crisis, with the Rome government set to take a majority stake on a provisional basis to save the bank from bankruptcy.

“This solution is a positive step forward for BMPS and the Italian banking sector,” EU Competition Commissioner Margrethe Vestager said in a statement.

“It would allow Italy to inject capital into BMPS as a precautionary plan, in line with EU rules, whilst limiting the burden on Italian taxpayers,” she added.

Under the deal, the Italian government will inject an unspecified amount of cash after the lender failed to raise funds on the market last year.

ANALYSIS: Here's what you need to know about the crisis at BMPS The ECB in December said BMPS, the world's oldest bank, was short a staggering 8.8 billion euros in capital.

The deal is fraught with political and economic complications for a centre-left government preparing for an election in the coming months.

Reports earlier this year said the heavily indebted Italian government will need to inject some six billion euros in the lender.

The rest will be raised through the forcing private lenders to the bank to become part owners, a controversial process to be overseen by the ECB.

The state of Italian banking sector has become a big worry for the 19-member eurozone, with Rome still failing to resolve the problem of piles of risky loans sitting on bank books.