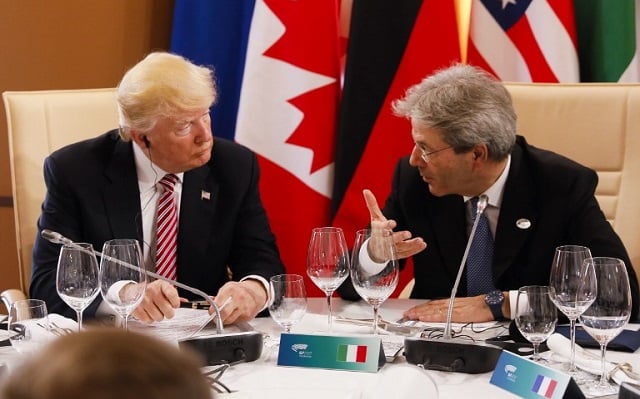 Prime Minister Paolo Gentiloni speaking to US President Trump during a working lunch at the G7. Photo: Jonathan Ernst/Pool/AFP

“Climate: We aren't taking backwards steps from the Paris Accord. Italy is committed to emissions reductions, renewable energy, and sustainable development,” Gentiloni wrote on Twitter.

He also joined continental Europe's two other biggest economies, Germany and France, in a rare joint statement noting their “regret” over the US decision.

“We are firmly convinced that the agreement cannot be renegotiated,” they added, referring to Trump's announcement that Washington was open to negotiating a new agreement.

The decision places the United States in line with Syria and Nicaragua, the only two other countries to decline participation.

It comes less than 18 months after the historic 196-nation pact was adopted in the French capital, the fruit of a hard-fought agreement between Beijing and Washington under Barack Obama's leadership.

When the accord was signed, then-Prime Minister Matteo Renzi said that Italy would “be one of the protagonists fighting against selfishness and supporting non-negotiable causes like the defence of our planet”.

Renzi said on Tuesday that the US decision “harms us and our children”.