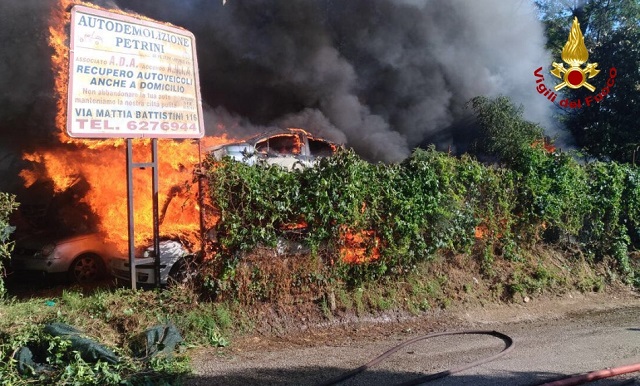 Firefighters described the fire as “vast and violent” and said it had also caused “numerous explosions” from the tanks of cars in the scrapyard.

Flames were still visible early on Friday morning, but the fire service said the blaze had been contained to the scrapyard and that no people had been injured from the fire or from inhaling toxins.

Three residential buildings near the site were evacuated on Thursday evening, while others were told to keep windows shut and stay inside, but after several hours the residents were allowed back into their homes.

Rome mayor Virginia Raggi visited the site on Thursday evening, where she said the fire had given people in the area “a big fright”. The clouds of black smoke, which had been visible from the Vatican, had also caused some panic on social media.

Raggi also said the Environmental Protection Agency had been alerted and would assess if the fire had caused any significant air pollution. A map showing the location of the scrapyard, to the west of the city centre.

The fire service said on Thursday evening that the fire was under control and that six teams of firefighters had assisted in bringing the fire under control.

It also shared on social media photos of firefighters tackling the blaze surrounded by burned-out cars.

The fire came just weeks after an enormous blaze broke out at a waste depot south of Rome, with huge clouds of smoke visible from several kilometres away.

At the time, local authorities urged those in the area to keep windows closed and avoid eating fruit and vegetables from the area until an environmental assessment had been carried out. Schools were kept closed for three days as a precaution.