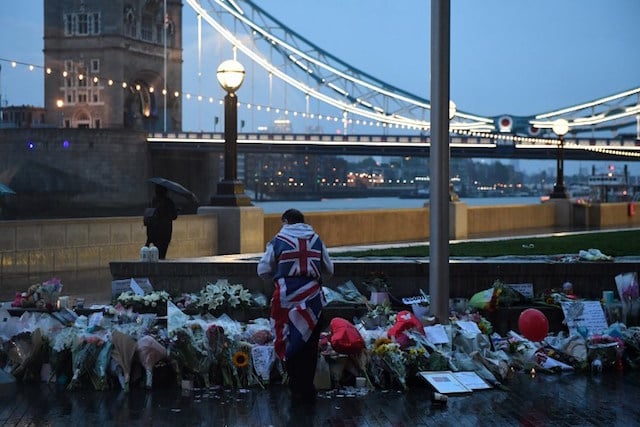 A man stands near flowers laid down after a vigil to commemorate the victims of the terror attack on London Bridge and at Borough Market. Photo: Chris J Ratcliffe/AFP
The mayor of Valsamoggia, a town near Bologna, said that Youssef Zaghba, 22, was the son of an Italian mother and a Moroccan father who had separated, and was registered as an Italian living overseas.
“In fact he never lived here,” said the mayor, Daniele Ruscigno. “The only member of the family that lived here was the mother, who was known but has not been seen around for some time,” he told reporters.
READ ALSO: Football: 1000 injured in Juve fan panic after bomb scare – police
Zaghba had lived mainly in Morocco but had recently spent time working in Britain, most recently at a London restaurant, according to Italian media reports.
The AGI news agency said Zaghba was intercepted at Bologna airport last year as he was about to board a plane for Turkey.
Italy's anti-terrorist force DIGOS believed he was trying to join Islamic State militants in Syria.
He was detained carrying only a small backpack, his passport and a one-way ticket to Istanbul.
Police reportedly found IS propoganda videos on his cellphone, but after an investigation, they failed to find sufficient evidence of links to terrorism to justify prosecuting him.
As a holder of an Italian passport he was not liable for expulsion under the kind of administrative order Italy routinely uses against suspected Islamist militants from Morocco and Tunisia, and so he was released.
According to AGI, the British and Moroccan authorities were notified of Zaghba's status as a potential militant by DIGOS.
But British police have said Zaghba was “not a police or MI5 subject of interest”.
According to the reports, Zaghba was born in Fez, Morocco, in January 1995.
His mother was said to have told police last year that he had asked her for money to travel to Rome before he left on his attempted trip to Syria.
READ ALSO: 'We can't lower our guard': Italy ups security in crowded areas after London attack