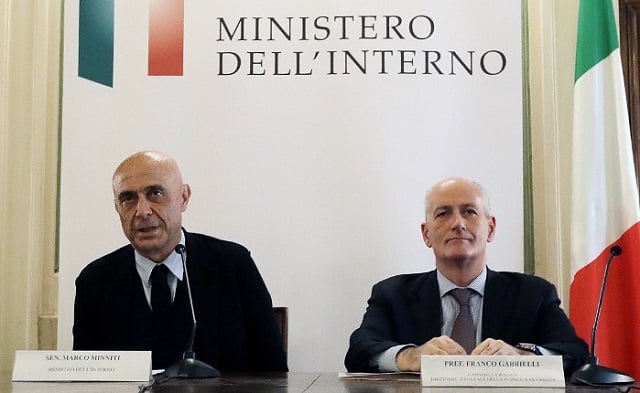 Zaghba, 22, was identified by the Italian authorities as a potential jihadist after he was stopped at Bologna airport in March 2016 on his way to Syria.

They tipped off the authorities in Britain and Morocco about him, but for reasons that are still unclear he was not on the radar of British police and intelligence services before Saturday's attack.

“We have the record of the notification and our conscience is clear,” said Franco Gabrielli, the chief of Italy's State Police.

“But as we are very aware of the responsibilities involved, we understand the distress and difficulties faced by those who have to manage such a complicated situation,” he told reporters.

IN DEPTH: How Italy keeps track of 80 terrorism alerts each day

Italy was in an easier position than countries like Britain, which had to deal with “innumerable” notifications of potentially dangerous individuals, he said.

Gabrielli, who is also in charge of Italy's department of public security, said investigators had found material from jihadist websites on Zaghba's cellphone. A man stands near flowers laid down after a vigil to commemorate the victims of the terror attack on London Bridge and at Borough Market. Photo: Chris J Ratcliffe/AFP

That was enough to warrant the warning to Britain and Morocco, but not to take further action against him, he said.

“We can't charge people simply because they visit certain internet sites,” he said.

“The possibility of forging links, exchanging ideas and discussing causes, these are some of our fundamental freedoms.”

Gabrielli was speaking on the sidelines of a meeting of police chiefs from eight southern European countries on the Italian island of Lampedusa.

The meeting was to boost cooperation on terrorism and migration in the first meeting of a new forum, the European Relationship for Mediterranean Security.