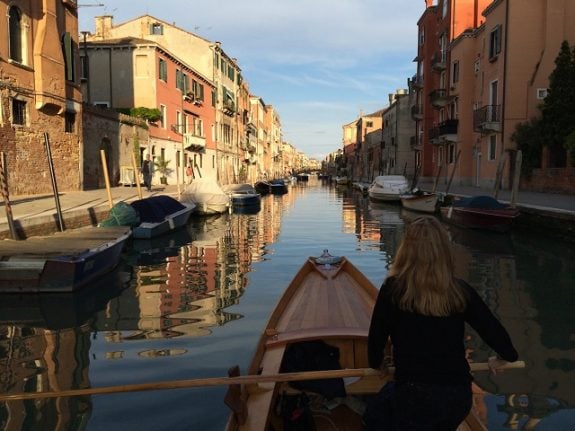 For years, rowing was the only way to get around the lagoon city, but many don't realize that the technique used in Venice is unique.

It may look as if gondoliers propel the boat forward by pushing against the canal bed, similar to a punt, but the city's canals are too deep for that. Instead, the voga alla veneta rowing technique uses an oar to guide the boat through the ancient waterways.

“It's the closest you can get to walking on water,” laughs Nan McElroy, an American who has called the city home for 13 years and now teaches tourists how to row like a Venetian.

Visitors learn the strokes – “you just need to relax and concentrate on a few mechanical motions”, explains McElroy – and get the chance to row at the bow of the boat, guided by an instructor or, if their ability allows, at the stern, in true Venetian style.

All Venetian boats use the same rowing technique, McElroy says, but that doesn't mean they are all gondolas.

The company, Row Venice, uses four traditional batela coda di gambero (‘shrimp-tailed’ boats, so-called because of the way the stern flicks up). These were once the most common boats on Venetian waters and can be seen crowding the canals in Renaissance-era paintings, while gondolas were reserved for only the upper classes, but today only a few of the boats remain.

They are shorter and wider than a gondola, which McElroy says makes them stable and comfortable, and a good vehicle for first-time rowers.

“Lots of people worry about capsizing or falling in the water, but that never happens. The boats are so stable and newbies are never left a poppa (at the stern) of the boat alone,” she explains.


Children as young as two can try their hand at traditional Venetian rowing. Photo: Nan McElroy

McElroy rows purely for fun, while Jane Caporal, who founded the organization, regularly races in the competitions held in the city.

The organization sponsors its instructors for every race they do, and there are several, including outings in the Grand Canal held three times a year, giving residents a chance to use the city's main waterway which is usually the domain of water taxis and cruise ships.

“We’re passionate about Venetian rowing and want more women to race, so offering sponsorships encourages participation and gives a monetary result for all the effort and training you put in. You have to train every day, so there are sacrifices to be made,” explains McElroy.

It is an almost entirely female organization, in contrast to the male-dominated profession of gondolier. Women have historically always rowed and raced in Venice, but Napoleon declared the sport male-only when he captured the city in the late 18th century.

Historically, Venetians had to be accepted into the strictly-controlled professional guild to gain a licence allowing them to work, and membership was usually handed down from father to son.

Eventually, this nepotism was challenged, and it became possible to practice as a gondolier after completing a long apprenticeship and passing an exam, proving knowledge of navigation, other languages, and Venice's culture.

But with only 450 licences available, it remains an exclusive club, and today, there are just two female gondoliers in the city.

McElroy also faced some difficulties when she first began rowing. Having visited the city numerous times over the years, she made the move official in 2004 and joining a voga club was one of the first things she did.

“It's a great exercise! You’re outside on the water, it’s non-impact, and you can row independently or as a team,” she says. “I kept improving and after a while, me and some of the other women at the club wanted to row out on the canals. We were told no, it's too dangerous – but eventually we found someone to coach us and we rowed the canals for a whole, wonderful summer.”

In the summer months, she says rowing on the lagoon, where the air is continuously moving, is a welcome escape from the city heat. “But a still winter's day is spectacular too. Wind and rain are our enemies and stop us rowing, but there's less motor traffic in the winter months, so the water is clearer and still.”

An increase in boat traffic is one of the changes McElroy has noticed since she first made the city her home.

“There are hotels in all areas now, which means there are water taxis, which are simply too big for the small canals,” she says.

Venice has struggled with increasing numbers of tourists over recent years, with complaints of pollution, littering, and disrespect for the city's monuments. Earlier this month the city council announced new measures aimed at limiting numbers and protecting the cultural heritage.

But the problem isn't the tourists themselves, McElroy argues.

“I blame a failure to manage the intense tourism. The vast majority of tourists want to be responsible and they’ll do what you ask, you just need good management,” she says. “The other problem is they come for a short time and all do the same things. My top tip is don't be in a hurry – the city deserves your time.”

She recommends making an effort to research the city's history and lifestyle, and seeking out less common but unique attractions such as the city’s artisan workshops, from oarmakers to goldsmiths to makers of marionettes.

“The Biennale, happening now, is a great time to visit – it’s one of the only times that many of the city’s palazzi are opened up. Even if you’re not that interested in contemporary art, you have a chance to see these great interiors.”

But the American rower says there's no chance of her joining the mass exodus of locals moving out of the historic city.

“I’m not going anywhere! It’s a great city and it suits the way I live. Plus, I'm addicted to the water.”

READ ALSO: Venice's Royal Gardens to get a €5 million makeover