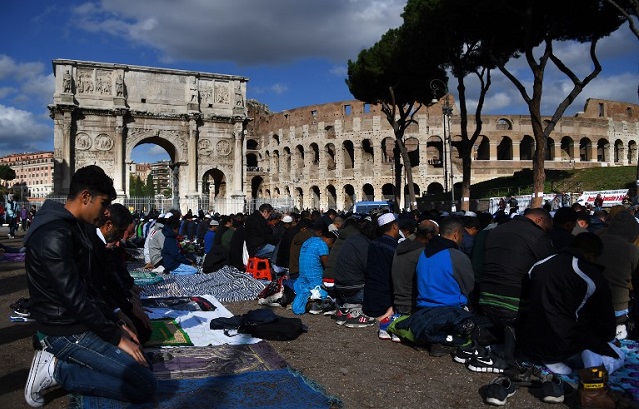 Youssef Zaghba, 22, was one of three men shot dead by police after a jihadist van attack and stabbing spree in the British capital on Saturday.

It has since emerged that the Moroccan-born militant had an Italian passport and his mother, a convert to Islam, lives near Bologna.

“All that has nothing to do with Islam, it was the work of crazies,” Mohamed Ben Salem, the Tunisian imam at the centre where Zaghba's mother worships, said of the attacks.

“It is not going to help things, people (in Italy) have been mixing up Muslims with terrorism for a long time.” Zaghba, 22, never came to the Bazzano mosque during his rare visits to his mother's home in nearby Fagnano.

“If he had lived full-time in Italy and had attended our mosque, he would never have picked up these kind of ideas, never!” said the Imam.

Like most mosques in Italy, the Bazzano one is a makeshift affair – the several hundred faithful worshipping in a corner of an old industrial building.

During the fasting month of Ramadan there are only a handful of worshippers there in the early afternoon and those who are willing to talk all speak of their concern at their community being linked, albeit tenuously, to events in London.

“Yes, I think this can do us harm after years working to build a relationship of confidence with the (non-Muslim) population,” said Bahi Cherkaouin.

“People have sacrificed a lot to create this space, some give 50, 100, 200 euros a month to keep it going and pay the imam, because the local authorities give us nothing,” added the 59-year-old Moroccan.

The Bazzano faithful are also concerned about what Zaghba's mother's story will do to the image of Islam in Italy. According to her aunt, Valeria Collina left Zaghba's father in Morocco because he was violent and wanted to take on a second wife. The imam says he will continue to try and project a truer image of Islam.

“We always urge people to come and see us, to take part in our open door events, because it is ignorance that leads to these acts of terror.

“These young people who blow themselves up, who blindly kill innocent people, they are empty inside and they understand nothing of our religion.”

He says he urges followers of his faith to inform the authorities if they have the slightest suspicion that someone in the community is undergoing radicalization.

Collina said she had told police to detain her son because she feared he was going off the rails. “I'm a good citizen who loves her country, an Italian Muslim.” Representatives from the British Muslim community pay their respects at a memorial for the London victims. Photo: Odd Andersen/AFP

Opened in 2004, the Bazzano mosque caused a bit of a row locally but that was quickly forgotten, locals say.

But many Italian Muslims feel they are victims of a general lack of equal opportunities for ethnic minorities, and of restrictions placed on their freedom to practise their faith.

The number of Muslims living in Italy has been recently estimated at around 1.4 million, or nearly 2.5 percent of the population.

It is considered the second most followed faith in the mostly Roman Catholic country but it has struggled to overcome a legacy of suspicion. A recent survey by the Pew institute found that 69 percent of Italians had negative views of Muslims. Islam is the only major religion not to be officially recognized by the state.

As a result, mosques are not eligible for state funding through a tax levy that funds other faiths, and Muslim employees are not guaranteed the right to take the day off on religious holidays.

Rome is home to the biggest mosque in the Western world but proposals to construct traditional-style mosques elsewhere have frequently run into opposition from local councils who can withhold planning permission on any number of technical grounds.

These can range from the size of proposed parking or toilet facilities to questions of architectural harmony.