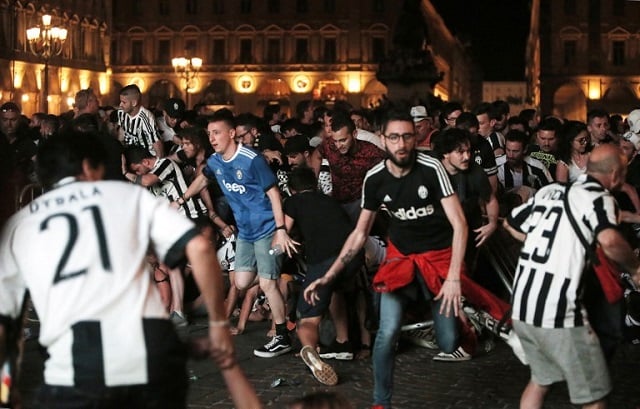 The ban prohibits the sale and consumption of alcohol outside bars and restaurants in the city's central nightlife district between 8pm and 6am. It will remain in place until September 30th and businesses found flouting the ban face closure of a period of between seven and 30 days, according to local paper Torino Oggi.

It is unclear what caused the stampede in one of the city's main squares on Sunday. Eyewitnesses at the time had said they thought people had set off firecrackers, causing panic, and that others had shouted that a bomb had gone off during the showing of the Champions League final match.

Three people, including a seven-year-old boy, were left in critical condition. The boy, named as Kelvin, was the most seriously injured, but by Thursday, he was set to leave intensive care and looking forward to playing football again, Repubblica reported.

In total, seven people were taken to hospital emergency units, though many of the injuries were cuts due to shards of glass from drinks bottles, many thought to have been bought from illegal sellers.

Prosecutors have opened a probe into multiple grievous bodily harm, and Appendino has said she is “prepared to take responsibility” for any failings the prosecutors' report may highlight.

“What I feel is anger; anger at the sense of powerlessness which follows these incidents,” the mayor said in a statement earlier in the week.

“I will do everything, personally and together with public institutions, to guarantee maximum security and ensure that this never happens again,” she said. Appendino added she had spoken to some of the injured, who had said they had believed at the time that there was an attack.

The mayor said city authorities were already working on security plans for further public events planned for the summer, and announced her intention to crack down on abusive drinks selling.

Italy's Interior Minister on Thursday said the government was working on “new methods of panic prevention and management” in the wake of Saturday night's events.

Minniti visited Turin on Wednesday to speak to those receiving treatment for injuries sustained in the stampede and discuss possible solutions with the city administration. He said it was particularly necessary to establish clear exit routes from sites hosting public events, and ensure attendees were kept informed about the emergency plan.

But the minister noted also the need to tackle “a psychosis that generates anxiety and creates a security problem”.

He said that there was “a clear emotional link” between the panic in Turin and the terrorist attack on a concert stadium in Manchester which took place just weeks beforehand, and added: “Fear was triggered; we had the reaction terrorists wanted to create.”

Earlier in the week, Minniti said that if the necessary levels of security could not be guaranteed, public events should not go ahead.

Security measures in place – including an increased police presence at some of the country's best known landmarks – have been repeatedly reviewed in the wake of attacks over the past year.

Turin's Chiara Appendino is the country's best loved mayor, according to a poll published by financial daily il Sole 24 Ore in January. The Five Star Movement politician is best known for her ambitions for Turin to become 'Italy's first vegan city', and a plan to cut back on Wi-Fi in schools and public buildings over health concerns.