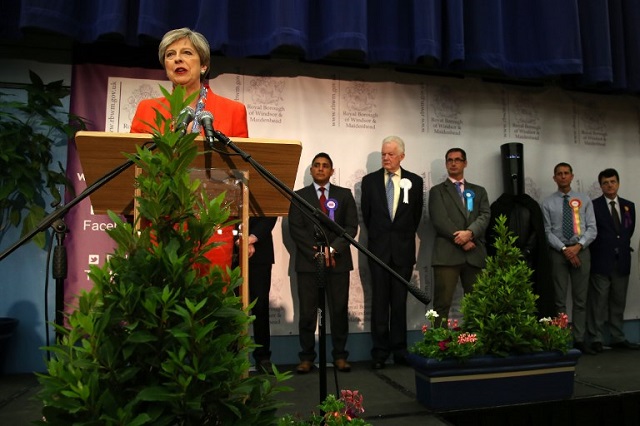 Theresa May speaks in Maidenhead after being re-elected. Photo: AFP

Prime Minister Paolo Gentiloni had not reacted to the result on Friday morning, but his predecessor and recently re-elected Democratic Party leader Matteo Renzi spoke about the surprise success of left-wing Labour leader Jeremy Corbyn.

Renzi is hoping to win back his old job in Italian elections to be held before spring next year. He faces competition not only from opposition parties on the left and right wing, but also from a breakaway left-wing faction of his own party which split off earlier this year.

Renzi's own predecessor, Enrico Letta, meanwhile said the result was “a demonstration that cunning and gambles don't pay off”.

He appeared to be referring to May's decision to call an unnecessary snap election in a bid to increase her majority ahead of Brexit talks, but could easily have been speaking about how he himself was ousted by Renzi, who went on to lose a referendum on which he staked his leadership.

Letta added that the result would make the EU “stronger” in Brexit negotiations.

The effect of the results and weakened Conservative party on Brexit negotiations was one of the key issues for observers in Europe. Italian financial daily Il Sole 24 Ore's headline was “Theresa May loses the bet; Brexit increasingly chaotic”.

The Espresso tabloid ran the headline: “Great Britain in chaos”, writing: “Great Britain has chosen a government of non-government”, and Il Fatto Quotidiano, which positions itself as an 'anti-establishment' publication, said the resulting hung parliament was “the worst nightmare” for the UK.

On the homepage of Italy's most widely read paper, Il Corriere della Sera, the British term 'hung parliament' was translated as as 'il parlamento impiccato'. This is a more literal translation of 'hanged' or 'strangled', less commonly used than the alternative term 'parlamento sospeso', which was used elsewhere in the paper.

The Repubblica daily went with the headline: 'May first but without a majority, UK risks ungovernability' – though a subtitle read: “Europe's revenge”.

Italians on social media were quick to coin the expression 'May una gioia', a play on the Italian phrase 'mai una gioia' which expresses frustration along the lines of 'everything always goes wrong for me'.

READ ALSO: Why the UK is now officially crazier than Italy