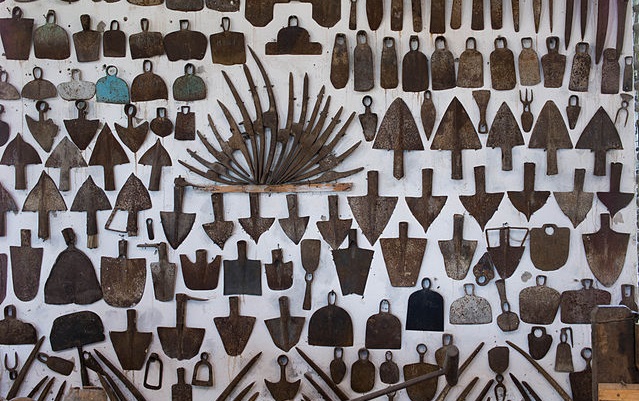 But sometimes you want a change from the usual Roman vases and Renaissance paintings, so why not head to one of the country's more unusual museums? From the macabre to the mundane, from salami to sculpted heads, we promise these exhibits are like nothing you've ever seen.

The humble tap takes centre stage in this museum which explores the history of hygiene, the invention of the device itself, and the story other water-themed inventions. The economy of the town of San Maurizio d'Opaglio relies largely on the production of taps, so the small two-room museum was created to celebrate its famous export through a display of historical documents and, of course, taps.

Obsessed with games arcades? If so, you'll love the Museo del Flipper (the Italian word for pinball machines) where you'll find over 400 of the machines, some dating back as far as 1830. It's possible to play on many of the games, but curious visitors can also learn about the history and construction of the machines.

Tucked away in the beautiful Tuscan countryside, San Gimignano's museum offers some grisly insight into crime and punishment of centuries past. Exhibits include gruesome instruments of torture from hanging cages to electric chairs and spike-lined coffins, but the museum also aims to serve as a reminder that torture still exists today, albeit in a different form. Not for the faint of heart. This is Italy. Of course there’s a museum devoted to pasta – the only one of its kind in the world. It’s currently closed for renovation, with the reopening date to be announced later this year, but it's well worth a visit once the updates are complete. Stroll through the rooms to discover the history of the undisputed best food ever, from early manufacturing processes to adverts through the ages. It will arm you with plenty of facts to amaze your Italian friends with the next time they scoff that foreigners don’t understand pasta.

To learn everything you never knew you needed to know about excrement, head to Castelbosco about 100 km south of Milan. The story of the museum's origins is an example of Italian innovation at its finest: a group of farmers found themselves with huge piles of manure on their hands, and spotted an opportunity to turn it into something useful.

They're able to transform the dung into a source of electricity by burning methane, as well as creating fertilizer, flowerpots, and even plates from the leftover poo. The exhibition teaches visitors about the history and uses of excrement, and even boasts artworks, including some made out of faeces. The Ethnographic and Witchcraft Museum, Triora

Triora, a small village near Italy's north-western border, is known as one of the country's most beautiful villages. But the medieval beauty hides a dark past: in the 16th century, it was here that the last suspected witches were burned in Italy. Local women, and one boy, were accused of causing plague, famine, deaths of livestock and even of children, and were burned at the stake for witchcraft.

The town's museum tells the story of the trials, with artefacts and documents from the time and information on the interrogations. Head down to the basement, which was the site of the town's prison centuries ago. Walking around Triora, there are plenty more reminders of its eerie past, from the magical souvenirs on sale to tours of the victims' homes and a summer witchcraft festival.

If the typical frescoes and statues you find in Italy's archaeological museums aren't exciting enough for your taste, head to the Gabinetto Segreto (literally 'Secret Cabinet'), housed in Naples' Archaeological Museum for some of the raunchiest finds dug up in excavations of Pompeii and Herculaneum. Head south of Parma to Langhirano in order to learn everything about the region's typical meat products. Exhibitions shed light on the Ancient Roman origins of parma ham, the development of curing processes, farming, and recipes. At the end of the tour, there's the chance to buy local products, tableware and cookbooks. Known as the Enchanted Castle, this one-of-a-kind site in Sicily is home to over 3,000 sculptures of human heads, carved into stone and tree trunks at the foot of a mountain. The artist, Filippo Bentivegna, started work on the sculptures after he was deemed too mentally unwell to serve a prison sentence for desertion in the Second World War.

Bentivegna supposedly took inspiration for the carvings from people he had met on his travels, though some of the sculptures are disturbing, with two faces or snarling expressions. The walls of the house are covered in drawings, many again depicting his experiences in America.

Ettore Guatelli started collecting everyday objects – tools, packaging, crockery, clothing – in order to preserve remnants of ordinary Italian life for future generations. Today the collection makes fascinating viewing, with each of the mundane objects arranged in geometric patterns or piled high against the walls, allowing visitors to ponder on the lives and stories behind each one. There's also a possibility to craft your own item out of some of the relics at the end of the visit. Italy's first dynamite factory was opened here in the late 19th century, and today the museum tells the story of the explosives themselves, as well as how the industry became a lifeline for the small town's economy. Learn about life in Avigliana at the time and how the dynamite was produced, before looking at the tools on display and exploring the very tunnels where it was made.

Part of Florence's Natural History Museum, this creepy assortment of wax anatomical figures is the largest such collection in the world. Several of the exhibits were originally part of the private collection of the city's most famous noble family, the Medici's, and the museum drew visitors from across the world, including German writer Goethe for example.

Located in Piedmont wine country, this museum traces the history of the humble corkscrew, and displays over 500 examples of the tool, hailing from different countries and eras. Worth a visit if you find yourself in the region. The Museum of Criminal Anthropology, Turin

Ever heard the phrase 'a born criminal'? Italian criminologist Cesare Lombroso believed you could tell whether someone would commit crimes based on how they looked, and this museum contains hundreds of the skulls he used for his studies, as well as other relics, drawings, documents, and the gallows used for hangings in Turin.

Take a water taxi to one of the most unusual and fascinating museums in Venice. The island of San Servolo was used as an asylum for more than 200 years, and today it's a place to learn about that chapter of the city's past. Visitors can see some of the equipment used, photographs of former patients, and the anatomical theatre. One of the exhibitions explores the history of mental health care and the ways in which it has progressed over the centuries.

READ ALSO: The 16 bridges you simply have to cross in Italy