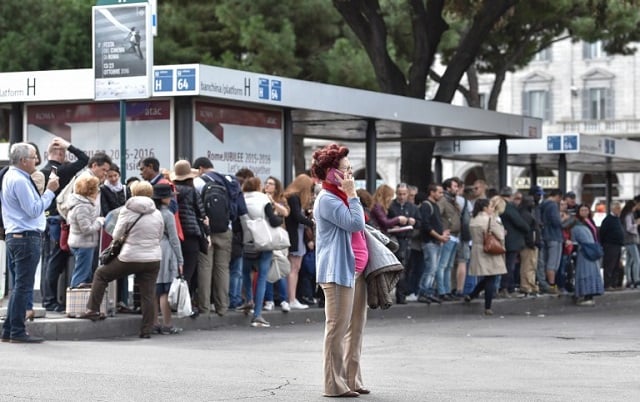 People wait at a bus station during a previous strike. Photo: Andreas Solaro/AFP

Transport Minister Graziano Delrio had said June 16th would be “a black Friday for transport”, thanks to a strike involving several of Italy's most prominent transport unions.

Some sectors began the strike on Thursday evening, with the disruption expected to continue until the end of service on Friday.

In Rome, the LuceVerde site which provides real-time updates on traffic congestion, warned that traffic was moving more slowly than usual on all the major roads in and out of the centre. The Metro was not running at all, together with the Roma-Lido train line.

For the latest updates, commuters are advised to check the websites of transport company ATAC or Muoversi a Roma.

Two overlapping strikes have been called by different union groups in the capital, one of four and one of 24 hours. The strike action will affect local buses, trains, and underground lines, with service guaranteed between 5 pm and 8 pm. Disturbance is likely to be worst between 11 am and 3 pm, when both strikes will be happening simultaneously.

In Milan, the strike was called between 8:45 am and 3 pm and from 6 pm until the end of service. Transport company ATM said mid-morning on Friday that the Metro line 5 was suspended while a “good service” was operating on lines 1, 2, and 3.

In Florence, local bus drivers will strike between 3:15 pm and 7:15 pm, while in Bologna and Ferrara, disruption to local buses and trains is expected all day, though service is guaranteed before 8:30 am and between 4:30 pm and 7:30 pm.

Those undertaking longer journeys could be at risk of disruption too, with the strike affecting national train, aeroplane, and even boat services.

Rail companies including Trenitalia (except in Piedmont and Valle d'Aosta) and Trenord will strike from 9pm on Thursday to 4pm on Friday.

The highspeed Frecciarosse trains, however, will run as normal. Italo, another high-speed train network, has published a list of its guaranteed services.

As for regional trains, they have to guarantee “essential services” between 6am-9am and 6pm-9pm, but commuters should expect a longer wait and more crowded service than usual.

The Leonardo Express service connecting Rome's Fiumicino airport with the central Termini station is also guaranteed to run at scheduled times, though some of the services will be carried out using replacement buses and so may take longer than normal.

Alitalia has cancelled several domestic and international flights and advised all customers planning to travel on Friday or early on Saturday to contact the airline or their travel agent. A full list of the cancelled flights can be viewed on the airline's website.

Airport workers will undertake a 24-hour strike, while cabin crew are striking for between four and 14 hours.

Three base unions, Cub-Sgb,Usi-Ait, and Cobas Lavoro privato called the transport strike to protest against “the privatization and liberalization of the sector”.