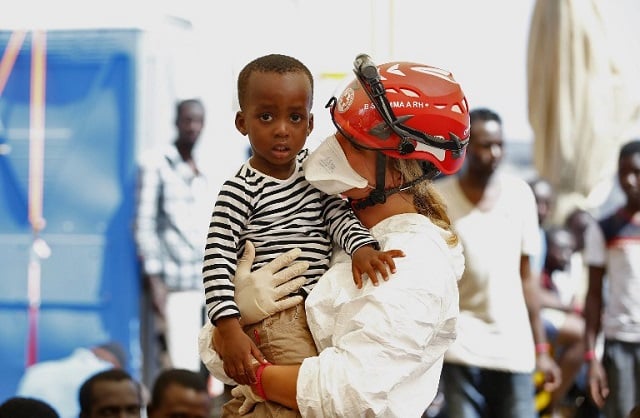 The de facto closure of Italy's northern borders in 2016 seriously complicated the challenge facing them, said the charity.

Many risked their lives along the roads or rail lines near Ventimiglia on the French border or Bolzano towards Austria, while Switzerland handed back some 5,000 foreign minors seized near Como on the northern Italian border between May and November 2016.

In parallel, asylum requests made by isolated minors choosing to remain in the Italian reception system have exploded: there were 6,020 in 2016, 50 percent more than in 2015.

At the end of the day 946 men, women and children have been brought on board the #Aquarius. All are full of the joy of just being alive. pic.twitter.com/BynEisuoR4

A Tweet from Doctors Without Borders showing children dancing and signing on board a rescue vessel.

Save the Children called for the rapid implementation of an Italian law passed in March, which set out precise procedures to verify new arrivals' ages, nominate guardians and placements in reception families while guaranteeing access to healthcare and schooling.

Of the 62,672 foreign minors who arrived without adults between 2011 and 2016, 17 percent were from Eritrea, 13 percent from Egypt, and nine percent each from Gambia and Somalia.

Most said they were 16 or 17 years old, and although a few were in reality older, the number of children and pre-adolescents under 15 jumped from 698 in 2012 to 2,050 last year. Another 8,300 more who arrived between January and May this year. A very small minority were girls, but they are also growing in number, from 440 to 1,832 over the period, and mostly from Nigeria and Eritrea, often victims of sexual violence while en route to Italy and threatened by prostitution networks in Europe.

Almost all the Eritreans, Somalis, Syrians and Afghans who arrived on Italy's coasts – numbering over 22,500 young people over six years – rapidly moved on to try to join family or friends in other European countries, putting themselves in the hands of unscrupulous people trafficking networks.

The UN's refugee chief Filippo Grandi said on Tuesday that Europe's programme for relocating the influx of migrants to the continent has been a “disappointment,” just as the EU began legal action against three eastern European nations for refusing to take in their share.

By the start of June, fewer than 20,000 of 160,000 refugees had been relocated under the solidarity plan put in place in 2015 to try to remedy Europe's biggest migration crisis since World War II and ease the burden on frontline states Italy and Greece.

READ ALSO: How this tiny Italian town opened its homes to refugees