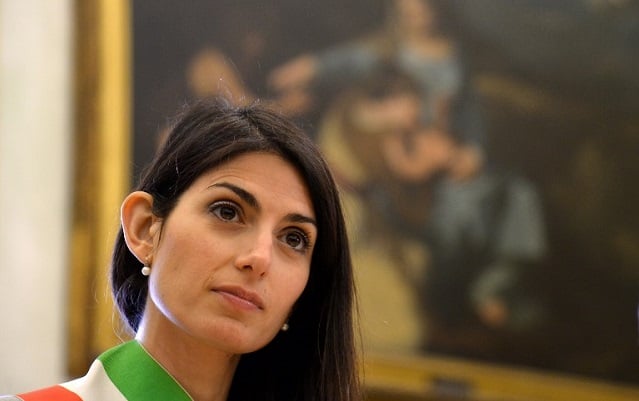 But one year into the job, she is struggling under the weight of a mediocre report card that has dented the fortunes of comedian Beppe Grillo's opposition party less than a year from national elections.

But 12 months later, ordinary Romans can see no signs of progress as the city's international image becomes increasingly tarnished by negative commentaries on rubbish-strewn streets and trees keeling over for lack of maintenance. On Viale della Moschea, next to the biggest mosque in Western Europe, and several other streets, the potholes are so bad the speed limit was slashed 10kmh (6mph) last week, on safety grounds.

Meanwhile the image of Raggi's administration has become pock-marked by the same kind of allegations of cronyism and sleaze that undermined its predecessors.

“Nothing has changed. Rome's problems remain the same only with time they're getting worse,” says Mariano, a restaurateur in the trendy downtown district of Trastevere.

Elected with just over two thirds of the vote in the run-off second round of last year's mayoral election, Raggi now has a disapproval rating at the same level.

And according to political expert Giovanni Orsina, she is regarded by her own party as more of a liability than an asset.

“Raggi speaks little, appears little, and M5S tries to avoid discussing Rome, which is a smart move – don't do anything to attract attention to what's happening,” the professor at Rome's LUISS university told AFP.

Raggi's staff did not respond to AFP's requests for comment from her or a spokesperson.

“I voted for her in the second round last year, not with any great conviction but with a little bit of hope,” says city resident Massimo.

“I thought we'd have seen some progress after a year. But I have never seen a city as dirty as Rome is at the moment.”

“Nothing has changed. I hope she can sort it out. She's got to give it everything she's got,” she told AFPTV.

Raggi got off to the worst possible start. Her victory was anticipated but she still took months to put together a team amid serial resignations.

In December she was forced to apologise for trusting one official she handed a plum role after he was arrested for suspected corruption. And she is still without a chief of staff.

Invariably referred to as a fiasco, the situation at the Michelangelo-designed City Hall contrasts sharply with the positive impression made by Chiara Appendino, another M5S mayor who won power in Turin on the same night as Raggi. “You can say the report card is catastrophically bad from every point of view,” said Orsina. “There's no leadership team, the council does nothing. It is like a temporary administration dealing with issues on a day-to-day basis.”

Fabrizio Ghera, head of one of the opposition groups in the city council, the right-wing FDI, says: “Not filling the potholes, cleaning the parks, pruning the trees: it's like a choice has been taken to do nothing.

“It is obvious the mayor has lost the broad backing she had in Rome.”

Raggi's Five Star administration can at least claim credit for one decisive action: but pulling Rome out of the bidding for the 2024 Olympics did not go down well with everyone in the proud and ancient city.