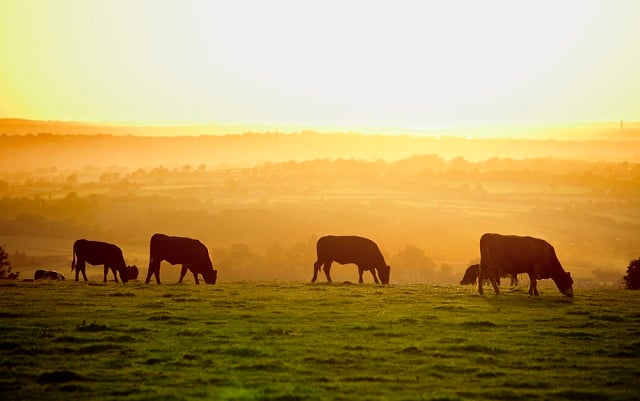 “Cows are probably the most domesticated, the most exploited animal,” nature photographer Paolo Rossi tells The Local.

“We think of them as very calm animals, living in stalls, giving us milk. But this herd has returned to the wild, retaken their freedom, and now they are living like they did 12,000 years ago, before men came along. The contrast is incredible.”

The 'rebel cows' as Rossi has termed them were first brought to Liguria in north-western Italy in the mid-90s as part of a European farming project. Their role was to keep soil clean through grazing, in order to reduce the risk of fires. One of the cows pictured in the documentary. Photo: Vacche Ribelli

When the funding for that project stopped, it was up to the local council to take care of the animals. But Mele, a tiny town of fewer than 3,000 human inhabitants, couldn't afford the extra costs, and in 2010 issued a police order to catch the cattle, who would then be destined for the abattoir.

Some of the cows were caught, but the authorities hadn't reckoned with the skill and agility of cows who had gained a taste of freedom. Several of the animals survived and continue to roam the Ligurian hills to this day.

“I’ve been interested in the story of the rebel cows since I heard about it several years ago,” said Paolo Rossi, whose short film about the cows, one year in the making, was released on Vimeo last week.

The film explores what it's like for the cows to live with a bounty on their heads. Rossi and his colleagues spoke to local residents, the town mayor, and zoologists, as well as filming the cows in their natural habitat.

“Cows have been bred to suit man's needs, but these animals have totally returned to life in the wild,” the photographer explains. Not only are the animals extremely agile, adapting to the natural environment, able to run extremely fast and jump around “like deer”. And they have taken on other characteristics, such as having one of the herd acting as a lookout when the others stop to eat. When the 'guard cow' hears a noise or spots something unusual, she alerts the herd and they flee, an animal behaviour expert explains in the film.

Roaming between the Appennine towns of Mele and Masone, the cows stay high in the mountains during daytime, only coming down to feed after dark, particularly during the winter season when food is sparse.

This made filming the herd difficult, and the team spent a long time in the area trying to catch a glimpse of the animals, using 'video traps' to film their movements and help from local people to track their movements.

The herd has developed these protective systems to defend themselves from threats – of which they face plenty.

For one thing, the judicial order to kill the animals is still in force, and authorities have tried a variety of methods both to catch the cows and prevent reproduction, though none of these have had any success as yet. Rossi says poachers are a further worry, and that some of the cows have been found shot dead, because of the high quality of meat from wild cows. And there are also wolves in the area. One of the goals behind the short film was to ease the conflict between the cows and the local population, Rossi says.

“They cause a problem for people, for example destroying privately grown vegetables. They’re big creatures, up to 500 kg, so they can easily cause a lot of damage,” he explains. Because the cows aren't officially recognized as wildlife, people whose gardens, farms, or vegetable patches are destroyed can face difficulties receiving financial help.

But many locals have developed a sense of respect and fascination for the animals, who have never shown aggression towards humans.

And Rossi says he hopes the herd continues to survive. “I don't think it will happen, though. I hope that they will stay free, but it's very difficult for them to live in the wild now,” he adds. There are at least six cows left, according to the footage shot by his team, though it's possible there are several more who weren't caught on camera.

The team, nature and wildlife photographer Rossi along with videographers Stefania Carbonara and Alessandro Ghiggi, turned to crowdfunding to finance the project. “We're young with very little experience of film, so crowdfunding allowed us to tell the story, and tell it well,” Rossi says.

And did he learn anything from the cows?

“From filming the cows, I came to understand the importance of living wildly. For men too, it's important to have a bit of life in the wild, in nature, to get some peace and quiet away from the chaos of the city and away from computers, social media and so on.”